The Queen’s costumes were a source of perpetual astonishment to De Maisse [a French envoy], and he constantly took note of them in his journal. He learnt that she had never parted with a dress in the course of her life and that about three thousand hung in her wardrobe. On one occasion he experienced something more than astonishment. Summoned to an audience, he found Elizabeth standing near a window, in most unusual attire. Her black taffeta dress was cut in the Italian fashion, and ornamented with broad gold bands, the sleeves were open and lined with crimson.

Below this dress, which was open all down the front, was another of white damask, open also down to the waist; and below that again was a white chemise, also open. The amazed ambassador hardly knew where to look….

The Frenchman was convinced that she was trying to bewitch him; perhaps she was; or perhaps the unaccountable woman had merely been feeling a little vague and fantastic that morning when she put on her clothes.

observations: What a strange anecdote this is – you’d think her maids or tiring women wouldn’t have let her go about like that, and it does seem very under-dressed for a meeting. De Maisse says he can see right down to her navel, a very modern-sounding phrase, we might as well be in the Daily Mail describing Saturday nights in big cities.

When we looked at the undergarments of Elizabeth’s mother, Anne Boleyn, our blog friend and costume expert Ken Nye kindly explained in the comments that Philippa Gregory’s novel The Other Boleyn Girl hadn’t got it right:

Her skirt and bodice would have been worn over a voluminous linen shift trimmed with black-work embroidery and the lacing would have been done "straight" (i.e. one lace going round-and-round) rather than in a criss-cross pattern - that's Victorian and later. 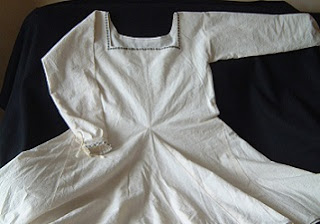 So presumably it’s that lacing that hasn’t been done here. How surprising. I asked Mr Nye what blackwork was, and he explained further:

Blackwork is simply a style of embroidery done in black silk on white linen. It was particularly fashionable in Tudor times, and is often seen in portraits as caps, and on the edges of ruffs and the bits of shirts that peep out at cuffs and necklines. 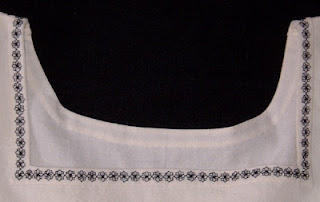 Strachey does make history clear, though his biographer Michael Holroyd says politely that he’s not always reliable about his sources. Elizabeth & Essex is shot through with the modish Freudianism of the day, and in fact Freud himself liked the book very much. It seems a real shame that Strachey didn’t write novels.

We don’t really ever need any justification for Dress Down Sunday, but in the previous entry from this book Strachey, says we should ‘look below the robes’ - and Thomas Cromwell in this entry says something similar, quoting Cardinal Wolsey.

The picture of Elizabeth is from Wikimedia Commons. The two pictures of a chemise and blackwork are from this website, which I think might be dormant now.
blackwork chemise dress down Sunday Elizabeth & Essex Elizabeth I Lytton Strachey shift