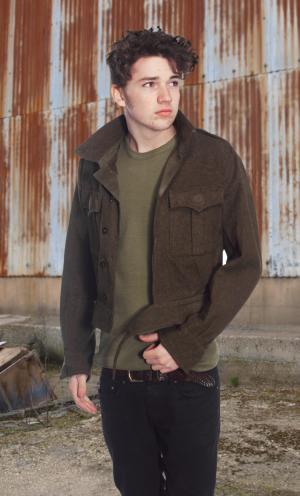 The door opened softly and a young man came in. They all look so alike, thought Bohun. Young, tough, white, boxer’s face. Black hair, white silk scarf, old battledress. This one carried a gun and looked as if he knew how to use it.

Bohun let him get three paces in the room before he kicked the switch. A steel shutter came down across the door, thudding softly home across its counter-balance. Bohun got cautiously to his feet and said with almost ludicrous earnestness:

“Think before you do anything rash. I’m certain you wouldn’t like the police to find you locked in here with a dead body.”

observations: Margot Kinberg (at her terrific Confessions of a Mystery Writer blog) was talking about memorable scenes and characters in murder stories, and I put this one forward: Bohun and the burglar will chat in a good-humoured way while waiting for the police to arrive, and he asks the burglar about something that’s puzzling him. The burglar gives him a helpful answer, a clue, and our hero – well, he doesn’t let him escape but he helps minimize the crime. We don’t ever find out the burglar’s name, and he doesn’t appear again, but it’s a scene that sticks in the mind. And there is another memorable minor character, the taxi driver: How did he know his fare was a lawyer? “Norways tell a lawyer” said Mr Ringer. Plus the young woman who has just been proposed to: “I shall make a rampaging wife!” she says - something we can all aspire to.

Michael Gilbert’s books had very varied settings, from a Cathedral Close (Close Quarters) and the solicitors’ office in Smallbone, to a prisoner-of-war camp and the HQ of a political party - but action scenes weren’t particularly his line. This is a very traditional Golden Age story: it includes a floorplan of the offices, and that magic moment when a character is scared by noises, opens the door and says ‘Heavens it’s you!’ in great relief....New chapter.

There is also very solid, satisfying clue-ing: what’s the implication of that letter addressed Dear Mr Horniman? Why is it meaningful that one of the secretaries is near the office on her day off - might she not be just doing her shopping?

Lawyers feature hugely in detective stories, but usually because they are in charge of the will, though in this crime story there is an anagrammatic, husbandly secret.

The picture is from an army surplus site – the white silk scarf was too big an ask, life has got harsher in the intervening years.
battledress burglar detective story lawyer Michael Gilbert office life Smallbone Deceased solicitor