One Pair of Hands by Monica Dickens 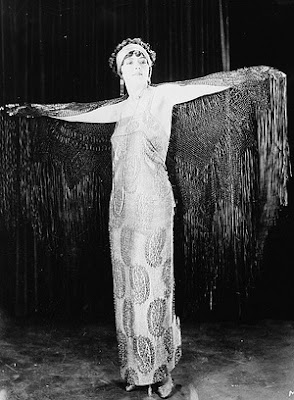 [The narrator is working for a dress designer]

When I took in the tea the drawing-room was draped in lengths of material of all colours, and the three of them were flinging themselves among it, holding up a piece here and there and exclaiming ecstatically. I put the tea-tray down on a vacant stool and was just going out when Martin Parrish rushed at me with a bit of gold lamé, and, commanding me to stand still, draped it swiftly and skilfully round my form. He stepped back with clasped hands, surveying with his head on one side, and I stood there feeling like one of those improbable-looking effigies in shop windows. ‘Look!’ he cried, calling upon the other two to admire. ‘Quite perfect for that blonde type – the whole effect in gold could be too marvellous. Take a note, Kenneth; what’s the number of the stuff? Oh, yes. Here – avoid any contrasts with BX 17 – accessories, etc., unbroken line important to carry on colour effect…’

‘No, don’t go away, I haven’t finished,’ said my employer irritably as he advanced on me with a length of black taffeta which he bunched round me… 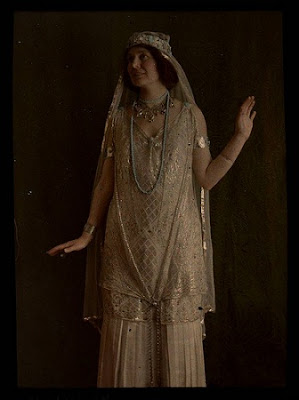 observations: In the days before Young Adult books were invented, there was a kind of grown-up book felt to be suitable and appropriate for the libraries of girls’ schools: light but edifying reading. Books like this one – a jolly, supposedly true account of someone’s life as they tried out a career, full of anecdotes but also giving you a clue as to what life was like. Nursing featured a lot: this one is about being a cook.

Monica Dickens was the great-granddaughter of Charles Dickens, and so rather posh: her selling point is the hilarity of a young woman of her background going into something so menial as cooking. (She also wrote more of her true-life adventures – nursing again - various novels, and the Follyfoot children’s books.)

Online friend Lucy Fisher (guested on Lark on the Wing, see also  her blog) pointed out this scene to me, and while I loved this bit, when I reread the book I was disappointed – I had remembered it from my own girls’ school years as being quite good. Now, I find it snobbish, mean-minded and tiresome: Dickens is plainly dreadful at the job most of the time, but is very put out if the people paying her get cross about her bad food, clumsiness and carelessness. It’s not clear if she’s being ironic here -

The top photo - from the Library of Congress - is of actress Winifred Bryson. The other woman in a gold dress was used on the blog to illustrate Jane Gardam’s Long Way From Verona, a YA book that would make for much better reading for a modern teenager.