Lark in the Morn by Elfrida Vipont: guest blogger 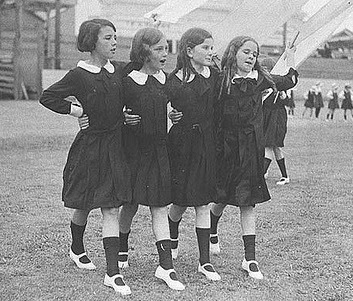 [Kit is going to an important Quaker boarding school]

‘Is it a nice uniform?’ asked Kit anxiously.

‘It’s a very practical one,’ said Laura, ‘though the girls seem to need more clothes than they did in my day. I’m sending you with the bare minimum: so long as your things are good and plain and sensible, they’ll do.’…

She did hope the uniform would come in time. She would hate to arrive looking different from all the other new girls. 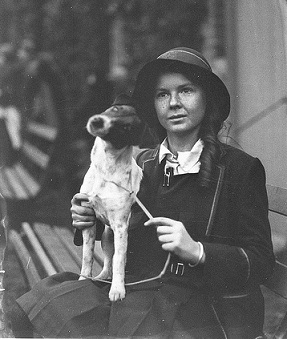 The big box from the school outfitters was delivered in the nick of time and it was a great relief when everything was assembled. The uniform looked very neat: grey gym-tunic and blue blouses, grey blazer, grey coat and skirt, grey Harris tweed overcoat, grey felt hat and grey beret. There were grey linen shorts for gym, and a blue silk tunic for Greek dancing. Blazer, hat-band and beret bore the school badge, a white fleur-de-lis on a blue ground.

observations: We have met Kit when she is older in The Lark on the Wing. Like Jassy & Vict in (yes, again) Love in a Cold Climate, Clothes in Books as a child was longing for boarding school, expensive new clothes and rags in the dorm, but alas never went there. So today we have a guest blogger, artist and ceramicist Wendy Wilbraham, who did go to a leading Quaker boarding school, though a good many years after Kit, and who read the book and agreed to tell us about uniform, but starts by saying that they didn’t use ‘thee’ and ‘thou’ like some of the Quakers in the book, but they did have musical evenings of fearsome memory.

The skirt was steam pleated from waist to mid-calf...one or two were slim so not so bad but almost all of us went through a stage of being round (and the school food did not help, all that stodge) and steam pleats do terrible things to a girl’s waist. This was miniskirt era, we rolled it up from the waistband with a belt [CiB says: yeah, we did that at state school too] Much later a new skirt was designed - somehow shaped at the hips so it sort of stood out before becoming A-line and we used to tack up the hem (with tacking cotton, easily breakable ) so that should there be a check on the girls’ hemlines mode) we could in an instant pull on the cotton thread and...DOWN it fell to the regulation ‘knee length when kneeling to ground.’

Laura is interesting because (unlike most adults in children’s books of the time) she is shown as having no redeeming features – Kit never decides that Laura does have her best interests at heart, and there is actually a suggestion in the later book that (while being such a goody goody) she defrauds Kit of her inheritance. For a family member not meant to be a proper villain, that’s quite something – as I said before, I feel Vipont may have had some personal grudges she was paying off here, and it is one aspect of the book that is refreshing – no learning no hugging between these two.

There is more to come on this book.

Both pictures are by Sam Hood (creator of 'Rich People with Dog', yesterday, amongst other images on the blog), and come from the State Library of New South Wales. The four girls are dancing round a maypole, something we looked at on 1st May.
boarding school Elfrida Vipont Lark in the Morn Lark on the Wing Quaker school singing uniforms