Dress Down Sunday: Nine Till Six by Aimee and Philip Stuart 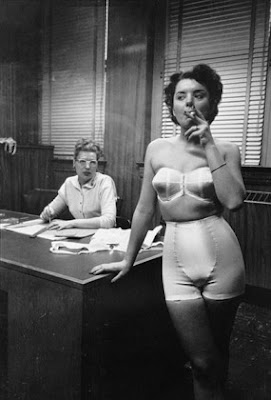 [The staff at a fashionable dress shop are getting changed. Stage directions:]


DAISY’S underclothes are cheap and not too fresh. One of the two Juniors wears a coloured artificial silk cami-knicker of the cheapest sort; the other wears a woven vest, a bust-bodice and a pair of knickers that don’t match…

GRACIE, by her hook, takes off her slip, trying to get into her dress while BRIDGIT’s back is turned. Her underclothes are home-made, of thick white cotton material, plain and neat…

The three MANNEQUINS (BEATRICE, JUDY and HELEN) come in, breathlessly, having run up the stairs. With the speed of habit they go to where their outdoor clothes hang, take off their slips and put on their own things. Their underclothes vary to suit their type, but they are skimp and up-to-date. They talk while they change. Their movements – also from habit – are always harmonious. 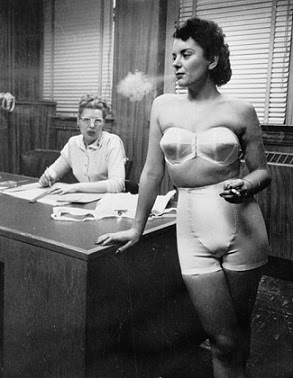 observations: I thought ‘skimp’ was a typo for skimpy, but apparently not: it could be a noun ‘a fashionably short and revealing garment’ (but you would expect it to be skimps in that case), but it is also an adjective meaning scanty. It’s hard to tell, but it doesn’t seem to have the judgemental (cheap or money-saving) overtones that skimpy might have.

Nine Till Six is very unusual in that the entire cast is female. It opened in January 1930 and ran in the West End of London for a year, and a low opinion of humankind suggests that a scene where young women walk around in their underwear probably did its prospects no harm.

Is it fanciful to imagine the discussions in many a prosperous home: does Mr want to take his wife to go and see a play entirely set in a dress shop, with no male characters?

Oh perhaps you’re right – it’s all gossip in the dressingroom, as they take their clothes off.

If you really want to go darling, we shall.


Most of the staff wear a ‘slip’ to work in, but this is probably more like an overall than what we would think of as a slip. One girl, Gwladys, sometimes goes off home in her slip, putting a coat over it but not changing back into her dress, and this is seen as quite racy.

The authors were very successful playwrights, and this one was filmed several times, and was shown on British TV in 1938, when the service was very much in its infancy and was about to be suspended for the duration of WW2. That’s an honour it shares with – happy bedfellows - TS Eliot’s Murder in the Cathedral: see blog entry here.

Links on the blog: More Dress Down Sunday by clicking on the label. What people wear for work gets consideration in this entry.

Suitably bizarre photos: they were taken by film director Stanley Kubrick in Chicago for Look magazine, and are now held at the Library of Congress.