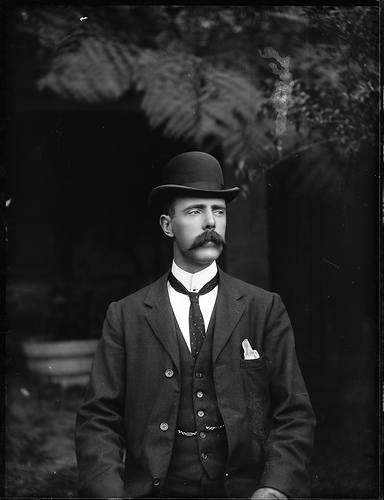 He’s a sprightly little man with lively eyes, thinning but carefully smoothed hair, a mustache like a circumflex accent, and decidedly old-fashioned taste in clothes. In the middle of the summer, Monsieur Pire is wearing a frock coat, a stiff collar, a large, floppy bow tie, a bowler hat and white spats. Perhaps the artistically flowing tie is intended to give this array a final bohemian touch. In his youth, confesses with just the right amount of wistfulness, he had himself ‘dabbled in painting’. As an amateur, naturally.

At the far end of the narrow art gallery, he sits down facing Mathilde, so close that their knees almost touch. Producing a small, worn notebook that has clearly seen better days, he writes down the name and birth date of Tina Lombardi, as well as the list of all the places where someone might have seen her over the last three years: Marseille, Toulon, La Ciotat, a brothel on the road to Gardanne.

observations: M Pire is going to help Mathilde find out what really happened to her fiancé in the trenches at the front line in the First World War. She has been told he is dead, but she won’t believe it yet. The investigator arrives half-way through the book: they have a long way to go yet. Manech was found guilty of self-mutilation, and rather than executing him, his senior officers send him and four others over the top into no-mans-land, with their hands bound.

This is one of the best books written about the First World War (or any war), a truly wonderful achievement: horrifying and informative, immensely affecting and close to unputdownable. Japrisot writes thrillers, and you can tell – the clues are placed, the tension is maintained, you never quite know what Mathilde is going to find out next. The story would make you despair of humankind, then give you your faith back. On first reading (and I have read it several times) you wonder how he can possibly end it: it is surely too easy to have Manech survive after all, and also inexplicable. But if he is dead all along, what was the point? The ending Japrisot creates is absolutely perfect and satisfying.

There is a very good 2004 film of the book, starring Audrey Tautou.

Links on the blog: Another book about the fallout from the First World War, and two books about the summers before the war.

The picture is from the Powerhouse Museum via Flickr.