Posted by Clothes In Books on March 17, 2013
That they May Face the Rising Sun by John McGahern 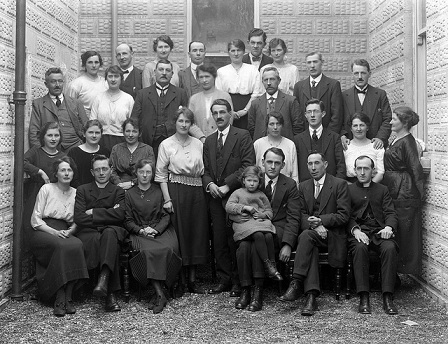 Not a single one of John Quinn’s children had stayed away. They all came to the wedding, bringing their wives and husbands and children. Gathered together outside the church door before making their way to the altar, they made a formidable and striking picture of youth and strength and solidarity. John Quinn was at their living centre, in a tailor-made pinstripe suit with a white rose in the buttonhole, thriving on the attention. Together they all filed into the church to await the bride. She came late. Only the whisperers at the church door saw her arrive, a handsome, determined-looking woman in her late 50s, wearing a stylish navy-blue costume and a veil with a spray of white lilies in her hair. In spite of her vigour and good looks the bride appeared vulnerable as she walked up in the aisle on her white-haired brother’s arm past all the curious heads that turned, but she appeared to grow in confidence during the ceremony. Afterwards she looked excited and happy when confetti was thrown and the photographs were taken.

observations: John Quinn is a man for the ladies, and for a view of the mountains, ‘lovely and blue in the distance’, and for what comes naturally to men and women. This marriage is not going to end well for him, and the reader is torn because although he is a most unpleasant man, it’s hard to hate him as much as you should (and his children, surprisingly, love him).

This is an almost perfect novel, entrancing, affecting, beautiful. It follows just over a year in the life of a rural Irish community, perhaps in the late 1970s or early 80s, centred on the Ruttledges, a middle-aged, apparently childless, couple, and circles of their friends neighbours and family. The title is explained a long way into the book, and even then is somewhat mysterious.

When she first met the Ruttledges she expected them to be bowled over by her personality… They found her exhausting. She drew all her life from what was outside herself, especially from the impression she imagined she was making on other people…


And her father-in-law Jamesie has ‘an artificial voice he used when he was too impressed with the subject matter of his own speech’ – yes, exactly.

These people are not perfect, but they’re doing their best. There’s a kind of review cliché here: you say ‘nothing much happens in this book blah, but somehow it says more blah the whole world blah.’ So: that. McGahern is one of those writers – like WG Sebald, who is in Ireland in the extract here - whose charms are very difficult to describe. The blog described Sebald as 'a miracle of a writer', and that’s McGahern too, and the Canadian writer Alastair McLeod. You just want to tell people to go and read him and find out for themselves. And then say Thank You.

Links on the blog: More Irish writers: James Joyce, Kate O’Brien, Edna O’Brien, and a stunning picture for last year's St Patrick's Day entry. More weddings all over the blog – click on the label below.

The picture, from the National Library of Ireland, is from a wedding in the Irish town of Waterford.
Ireland John McGahern St Patrick That They may face the rising sun weddings WG Sebald