London Belongs to Me by Norman Collins 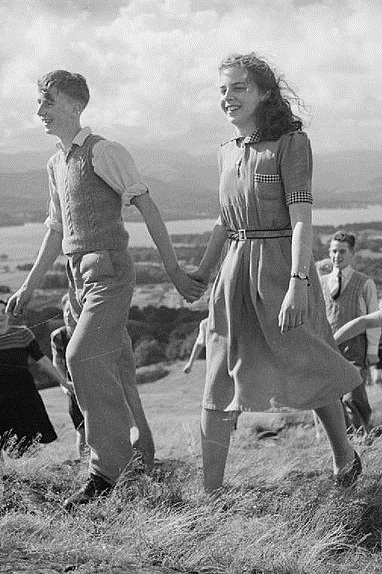 In the end it was the Zoo they decided on. Bill seemed rather surprised when Doris suggested it. But it was certainly a relief. He’d only got ten shillings until Monday and if Doris suggested going down West, he wasn’t sure how they’d get back again.

They set off up the Adelaide Road arm-in-arm – Bill had taken hold of Doris’s arm and shoved it absent-mindedly through his almost as soon as they left the house – and climbed the steep path leading to the top of Primrose Hill.

Then, if you had stood there on the summit under the pink hawthorn, looking out over London – almost standing on top of it as it were, with St Paul’s and Big Ben underneath your feet – you would have seen Bill and Doris going down the long walk on the Regent’s Park side. They made rather a gay pair –Bill in … grey flannels and Doris in a yellow dress. Somehow they made everyone else who was out that afternoon seem rather heavy and middle-aged.

observations: For Valentine’s Day: Bill and Doris are going on their first proper date. (An earlier entry showed Doris’s mother buying an outfit for her first meeting with Bill’s mother, later in the book.)

Doris is quite critical of Bill’s clothes – his sports jacket gives him an ‘amateur vanman appearance’, whatever that is – but she is going to get pretty smitten, as is he, and Collins will follow their romance with the same care he gives to the other characters in this long book. They will all have their lives massively altered by the outbreak of the Second World War.

Looking at that great romantic novel The Making of a Marchioness at the end of last year, I criticized the Marquis for comparing his ladylove to an animal at the zoo, and also for giving her a ring with a stone the size of a trouser-button. But perhaps this was a standard measurement for gew-gaws: later in this book, Bill will buy Doris a wrist-watch for four guineas, ‘a nice little thing in chromium about the size of a small trouser-button’. He spends another five shillings – 25p, 40 c – on a dozen roses for her, which makes David Copperfield – our entry was called ‘all that money on a flower?’ – look even more lavish with his 2/6 (12.5p, 20 c) spent on a buttonhole a hundred years earlier.

Love on the blog: Last year’s Valentine entry showed the importance of the Eye of Love, in a splendid non-makeover scene. A romantic proposal here, falling in love on the river here, and a gorgeous introduction to love and cider with Rosie. Another first date in this entry.

The picture is from the Imperial War Museum Collection, and is of young people at a Co-operative summer school at Lake Windermere.
flowers London London Belongs to Me Making of a Marchioness Norman Collins trouser button watch Zoo