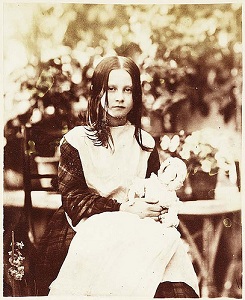 A doll is among the most pressing needs as well as the most charming instincts of feminine childhood. To care for it, adorn it, dress and undress it, give it lessons, scold it a little, put it to bed and sing it to sleep… all the future of the woman resides in this…

In a very short time the stranger was back, and now he was carrying the fabulous doll which during that day had been coveted by every child in the village. He set it upright in front of Cosette and said: ‘Here – it’s for you.’… Cosette looked up, as dazzled by his appearance with the doll as she might have been by a burst of sunshine.


[the next day] When Cosette appeared in the downstairs room the stranger undid his bundle. It contained a woollen dress, an apron, a camisole, a petticoat, a shawl, woollen stockings, a pair of shoes – all the clothing needed for an eight-year-old girl. Every article was black.


‘Take these, child,’ the stranger said, ‘and get dressed as quickly as you can.’

Day was breaking when the people of Montfermeil, engaged in opening their shutters, saw a poorly clad man go along the Rue de Paris hand-in-hand with a little girl dressed in mourning who was carrying a large doll. 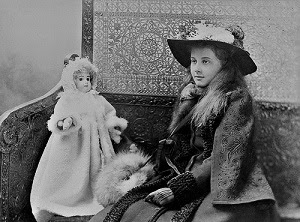 observations: The film of Les Miserables goes on general release in the UK today, based on the immensely popular musical. To read the original book is no light undertaking – my Penguin copy has more than 1200 pages – but very much worth the effort. It is an unforgettable story, imaginative, complex and complete: a perfect work of art and surely one of the greatest novels ever written.

In the excerpt above, Cosette gets black clothes because her mother is dead. Fantine had worked in a factory and as a prostitute to support her, and in her desperation for money had sold her hair and even her teeth, not knowing that Cosette was being mistreated by her carers, the Thenardiers. They bully her and treat her as a servant – but her life, like her clothes, will change when the stranger – Valjean, the hero – takes her away. But there is still an awful lot of the plot to come.

With thanks to Anna for the suggestion.

Links on the blog: Saki’s children, rich and poor, share the idea of a vicious doll. The Little Princess was left with nothing more than her doll when she descended into poverty.

The pictures are from the National Library of Wales and the McCord Museum in Montreal.