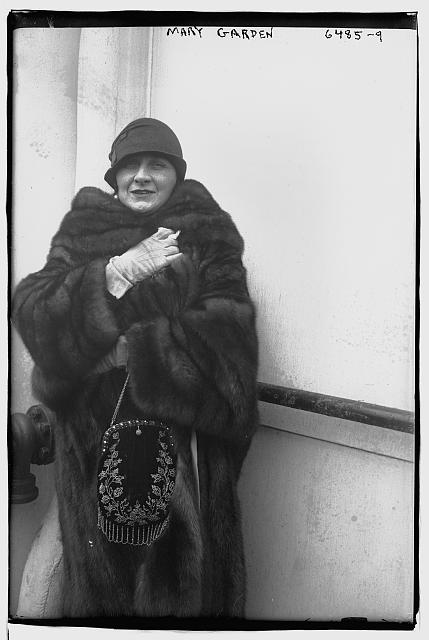 [Strauss’s] Salome was more in [Mary Garden's] line: she sang it in in French, as she did all new operatic roles, and performed the Dance of the Seven Veils herself, swathed in layers of diaphanous tulle. In Chicago, the police banned it as an affront to public morality: the police report on the first performance read thus: ‘It was disgusting. The whole show lacked high class. Miss Garden wallowed around like a cat in a bed of catnip. There was no art in her dance that I could see. If there was it must have been black art. I wouldn’t call it immoral; it was not high class enough to be called immoral….’

But Mary Garden was to go a lot further than biblical virgins caressing severed heads. As Massenet’s Cleopatre, ‘the queen, disguised as a boy, visits an Egyptian brother and makes love to another boy.’

Sadly, Garden’s records communicate nothing of this fatal allure. In general, her singing makes a pleasant, correct and unmemorable impression.

observations: Mary Garden was a huge opera star in the first third of the 20th century, and a noted contrast to last week’s diva, Geraldine Farrar, according to Christiansen:

…There was nothing healthy about [Mary] Garden…. For good clean frilly-knicker fun Geraldine Farrar was New York’s prima donna, but Garden excelled in conveying the more sophisticated and exotic varieties of eroticism.


Yet Garden said herself that she wasn’t a very sexual person herself: ‘I had a fondness for men, yes, but very little passion and no need’ – she is generally described as a complete egotist, with an excellent eye for publicity. She ended up, very unusually for a woman, director of the Chicago Opera, and was, apparently, an artistic rather than a financial success. She doesn’t seem to have been at all prone to the usual diva trait of finding unsuitable men and being badly-treated and conned by them.

Links on the blog: This entry should be read with last week’s from the same book on Geraldine Farrar. Another Strauss opera is mentioned in the notes to this entry.

The picture is obviously something of a cheat, as she is fairly plainly not in character, not on stage, and not naked underneath the fur coat. But it is Mary Garden, from the Library of Congress.
diva dress down Sunday fur coat opera Prima Donnas Richard Strauss Rupert Christiansen Salome