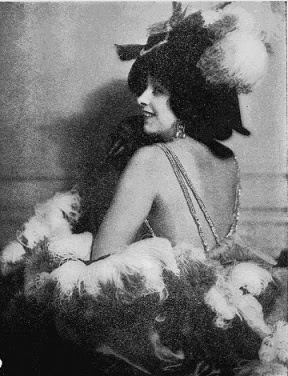 [Geraldine Farrar’s] manner on stage had naturalistic immediacy that compensated for a lack of vocal éclat.

She played up to her audiences with an energy bordering on vulgarity. Caruso balked at having his face slapped by Farrar’s Carmen; as the music hall singer Zaza in Leoncavallo’s opera of that name, she created a scandal by ‘raising her skirt to perfume the panties with an atomiser’; as the Goose Girl in Humperdinck’s Konigskinder, she would take her curtain call carrying one of the birds under her arm…

The teenage girls who screamed and waved flags at the stage door on Farrar nights were christened the Gerryflappers, and their collective crush became something of a nuisance at the Met, which was fast losing its dignity…

[Farrar announced her retirement just after her 40th birthday] At a Saturday matinee in April 1922 she went out as Zaza, perfumed panties and all. ‘I don’t want any tears in this house,’ she said in her traditional curtain speech… The Gerryflappers then clad her in crown, sceptre and robes and she was borne aloft on to Broadway through an enormous cheering crowd.

observations: For anyone with the slightest interest in opera, this book is a treasure trove. It combines mini-biographies of many of the great singers of the past 300 years, along with anecdotes - scurrilous, informative and funny - and technical details pitched at just the right level (for this reader anyway). Three things become clear: 1) great singers are as different from each other as any other group of people would be, but 2) unhappy marriages and relationships feature a lot, with the divas having a particular pull to conmen, and 3) every generation of fans and critics says the new lot aren’t a patch on the old ones.

Like many of the singers in the book, Farrar was a phenomenon in her day, but her name would not be known outside opera circles now. (Zaza, the opera, has also sunk from view, though it sounds splendid.) She started making movies in 1915, and the mind boggles rather at the thought of her starring role as a silent Carmen – plenty of opportunities for the piano-players in the cinemas, perhaps.

Links on the blog: Death at the Opera was a bit of a misnomer, but still a good book. The play Romance (the unlikely connection between Love in a Cold Climate and Travels with my Aunt) features an opera singer who would certainly have earned a place in Prima Donnas if she’d really existed.