Posted by Clothes In Books on November 18, 2012
Dress Down Sunday -
looking at what goes on underneath the clothes
the book:
The Big Sleep by Raymond Chandler
published 1939  chapter 7 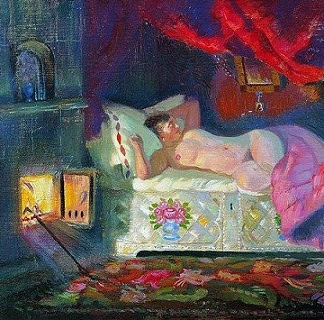 There was a broad low divan of old rose tapestry. It had a wad of clothes on it, including lilac-colored silk underwear… Miss Carmen Sternwood was sitting on a fringed orange shawl …Her eyes were wide open. The dark slate color of the iris had devoured the pupil. They were mad eyes. She seemed to be unconscious, but she didn't have the pose of unconsciousness. She looked as if, in her mind, she was doing something very important and making a fine job of it. Out of her mouth came a tinny chuckling noise which didn't change her expression or even move her lips.

She was wearing a pair of long jade earrings. They were nice earrings and had probably cost a couple of hundred dollars. She wasn't wearing anything else.

She had a beautiful body, small, lithe, compact, firm, rounded. Her skin in the lamplight had the shimmering luster of a pearl. Her legs didn't quite have the raffish grace of Mrs. Regan's legs, but they were very nice. I looked her over without either embarrassment or ruttishness. As a naked girl she was not there in that room at all. She was just a dope. To me she was always just a dope.


observations: Philip Marlowe, a private detective, has been employed by Carmen’s father to try to sort her out. She has been photographed in the setup above, and will be blackmailed. She is a bit of a lost cause, and her sister Vivian (the Mrs Regan above) is a lot more promising. But to say that Carmen 'was always just a dope' isn't quite true.

The plot is famously complex, though this is really just a trope that people repeat without thinking about it – there IS one unanswered question in the plot, but everything else is fine, it is not true as people merrily say, that “no-one knows who did it.”

Links up with: The stepmother in I Capture the Castle, the revered Topaz, had been painted wearing a jade necklace and also in the nude. (Topaz is very pale and the picture “is called Composition… but Decomposition would suit it better” Cassandra says.)

The picture is by Boris Kustodiev (who also painted the wonderful man in a robe illustrating this entry) and we have only used a part of it: the merchant’s wife in the picture has a strange visitor, but you would have to see the whole thing to see what it was. It’s not Philip Marlowe, that’s for sure.