Tracking down Doris Keane in Romance 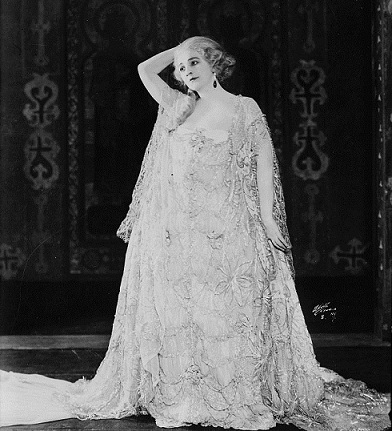 [She sweeps up with the group of young dandies who have accompanied her and stands for a moment at the top of the stairway, laughing and talking, always facing in the direction whence she came, away from Tom and Van Tuyl. She is a bewitching, brilliant little foreign creature — beautiful in a dark Italian way. She is marvellously dressed in voluminous gauze and her dress is trimmed with tiny roses. Her black hair hangs in curls on either side of her face and three long soft curls hang down her low-cut back. On her head is a wreath of little roses. She wears long diamond earrings, a riviere of diamonds is about her neck, diamonds gleam on her corsage, her wrists and hands. She carries a fan and bouquet in a silver filigree holder. She speaks in a soft Italian voice, with quick bird-like gestures. She seems herself a good deal like an exquisite, gleaming, little humming-bird.]

observations: When we looked at Graham Greene’s Travels with my Aunt last week, there was a reference in it to this play: ‘the faded luxury of the room seemed like a stage set at the Haymarket. It brought to mind photographs of Doris Keene in Romance…’ (in fact it should be spelled Keane – not clear if this is an editing error, or a deliberate slip, as the only minor romance of Greene's narrator’s life is with a woman called Miss Keene). The Clothes in Books mind recovered the fact that these four words – ‘Doris Keane in Romance’ –also occur in Nancy Mitford’s Love in a Cold Climate, but had no idea what was meant. So we set to work on a bit of clothes&books related research, and got hold of a copy of the play. (The Mitford-related side of it will feature in a different entry.)

As it turns out: Romance was a hugely successful play in the early years of the 20th century, although it is now almost completely forgotten. There is a lost silent film of it, and Greta Garbo played the main role in a 1930 Oscar-nominated film. The play ran for years in London, starring Doris Keane, and Edward Sheldon is said to have been in love with her.

The story is highly melodramatic – a serious young clergyman falls in love with a beautiful opera singer with a shady past. Surely he can’t possibly marry such a person? There are shades of La Traviata here (and although the heroine of the opera is called Violetta, in the source novel she is Marguerite). Cavallini talks in the most dreadful stage Italian accent in the play, and the moral principles therein are hard for modern minds to comprehend, but still you can see why it would have been so successful in a good strong production.

Links up with: La Cavallini’s most famous role is in Mignon, now little-performed, and one of the characters in Joyce’s The Dead goes to see the opera.

The picture is from the Library of Congress Bain Collection: it shows Doris Keane, but doesn’t specify what in – the costume looks right for this scene of Romance, but there is no black hair….

NOTE ADDED LATER: A very helpful blog reader left a comment (click below) to explain exactly what the cosume above was:

The picture is of the production of 'The Czarina', also by Sheldon and written especially for Doris. She wore four costumes in Romance...The first act was flame-coloured gauze... The second act was a black velvet dress with a low, square neckline  [this is the one featured in this entry]...The third act was an evening gown mostly of lace over pink silk... Some of these items still exist, and are owned by her descendants.


Read the comment in full, below, for more fascinating details.