How Cedric looked at the Ball 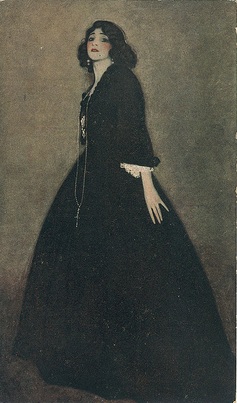 [Polly and Fanny, both pregnant, are discussing a very grand entertainment given by Polly’s estranged mother]

‘So what about the ball – have you heard anything? You really ought to have gone Fanny.’

‘I couldn’t have. The Warden of Wadham and Norma went – not together I don’t mean, but they are the only people I’ve seen so far. It seems to have been very splendid, Cedric changed his dress five times, he started with tights made of rose petals and a pink wig and ended as Doris Keane in Romance and a black wig, he had real diamonds on his mask. Your mother was a Venetian youth to show off her new legs and they stood in a gondola giving away wonderful prizes to everybody – Norma got a silver snuff-box – and it went on till seven. Oh, how badly people do describe balls.’

[later Polly sees her mother, and asks her about the ball]

‘What was your dress, Mummy?’

‘Longhi’ said Lady Montdore, evasively. ‘Veronica Chaddesley Corbett was very good as a prostitute (they were called something different in those days) and Davey was there, Fanny have you heard from him? He was the Black Death. Everybody made a real effort, you know – it’s a terrible pity you girls couldn’t have come.’

observations: Yesterday’s entry explained how this one came about: it’s the reference to Doris Keane in Romance – and here she is. (Though really, a shame we couldn’t find a picture of tights covered in petals and a pink wig). Cedric, the Montdore heir, is very beautiful and very camp and, though he precedes the word, gay. He must have looked a picture dressed as an opera singer. He has a keen interest in fashion throughout. Apparently, it was considered very shocking when the book first appeared that he should achieve a happy ending and not suffer or be made unhappy by his sexual orientation. In the play, the characters are allowed happiness, but not together, and at one point the hero describes the heroine thus: 'Your lips drop as the honeycomb. Your mouth is smoother than oil. But your feet go down to death, and your steps take hold on hell' – a mashup from Proverbs in the Bible, and seeming a bit excessive, though he is very upset at the time.

‘Doris Keane in Romance and a black wig’ is an example of the rhetorical device of zeugma or syllepsis.

The clothes in the photo are described in a stage direction: ‘She wears a wonderful black velvet dress... around her neck is a long rope of pearls; at the end hangs a cross.’ She is also carrying a monkey, who wears green satin, diamonds, and a red turban – the actresses must have enjoyed that, while Cedric surely would have loved such an accessory.

Links up with: Yesterday’s Doris Keane entry - don't miss the comment below this entry, in which a very knowledgeable reader tells all about her costumes - and explains why this is the best-known one. Fanny, and Polly, and Love in a Cold Climate have all featured before.