On not being Dame Judi 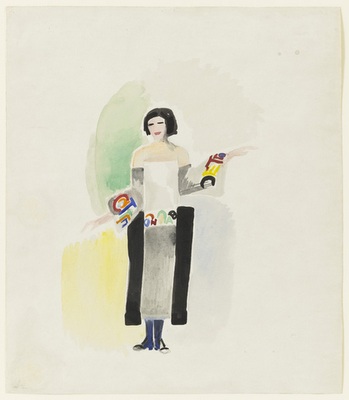 Miranda had a grey-white Louise Brooks bob, and severe black glasses, oblong like a letterbox; her necklines squarely suggested the unspecifically medieval. With what she could alter, she tried to impose corners, lines and geometry on a general appearance otherwise curved and bulging to a fault. She was aware of the dangers to a woman of her size and age of flowing red and purple velvet, of ethnic beads and the worst that [the shop] Hampstead Bazaar could do. She would not, like most of Hanmouth’s women, be inspired by Dame Judi Dench on an Oscar night, and she dressed, as far as possible, in the black and white lines and corners of the fat wife of a Weimar architect. Kenyon was used to being told what a marvel his wife was; he did quite well, all things considered. Reading groups, local groups, charities, and a party three times a year. It was obvious what Miranda thought of herself in her lovely and expensive home. Most people agreed she was marvellous, though wondering how she and Kenyon stretched to such a house on the salary of a civil servant and a university lecturer. Kenyon himself had lived for so long in proximity to the marvel that, like a waiter working in a restaurant with a view of the Parthenon, he seemed years ago to have stopped decently appreciating it.
observations: Perhaps your favourite character in this book is related to your own age, gender, status in life. I would dread to think what that discloses. Miranda is a wonderful creation in a book full of them: the clothes description is perfect, as are the other details of her life:

Twice or three times in the summer, Miranda would don a floppy hat kept specifically for the purpose. She would go and sit on one of their four deckchairs with a gin-and-tonic and a copy of a novel by Virginia Woolf. There she would stay until the doorbell rang, and she could be discovered in that position.

And then there is the student who asks for leeway because her parents are getting divorced and she is upset. Miranda’s response to that is beyond perfect, even if it gets her into trouble – she writes to the parents…
The book is reputed to have made Philip Hensher very unpopular in Exeter and at its university (to the point of his leaving?), where people saw it as an unflattering picture of them. But it is truly a picture of England today, and a majestic overview of the good and the bad.
Links up with: Wearing black and white is good for children, apparently.  Nancy Mitford’s Fanny might have liked Hampstead Bazaar. More dressing for parties here and  here and here. For more Louise Brooks click the tag below.
The picture is Robe Poeme no 1328 by the artist Sonia Delaunay.