Dress Down Sunday: "Under your dress you are naked?"

Posted by Clothes In Books on August 05, 2012
Dress Down Sunday -
looking at what goes on under the clothes

also known as Being Julia 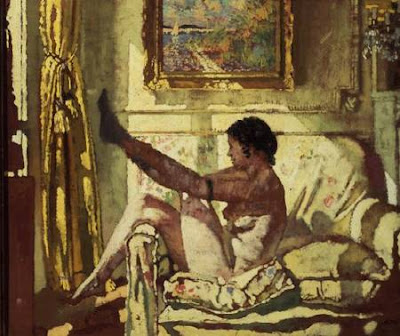 They made a great fuss of Julia. They dosed her with tisanes, and were anxious that she should not sit in anything that might be thought a draught. Indeed a great part of their lives was devoted to avoiding draughts. They made her lie on sofas and were solicitous that she should cover her feet. They reasoned with her about the clothes she wore. Those silk stockings that were so thin you could see through them; and what did she wear next to her skin? Aunt Carrie would not have been surprised to learn that she wore nothing but a chemise.

"She doesn't even wear that," said Mrs. Lambert.

"What does she wear then?"

"And a soutien-gorge, I suppose."

"Then, my niece, under your dress you are naked?"

"And without being a prude," added Aunt Carrie, "I must say that it is hardly decent."

observations:   Following on from Friday’s entry, which should be read first.

Julia is having a short holiday while thinking what to do about her future. She is worried that she is getting old, that younger actresses will take her parts and her lovers. The ill-advised attempt at seduction will be one idea, but soon she will have a much better one. Like a modern woman, she works very very hard at keeping herself thin, at staying beautiful. A soutien-gorge is a bra.

Theatre was made into a film called Being Julia in 2004, and Annette Bening got a well-deserved Oscar nomination, but practically no-one saw the film – a pity, the final 20 minutes contains the best and funniest scenes set in a theatre you could ever wish to see, and it was the role of a lifetime for Bening. It is a similar milieu and idea to the far-more-famous 1950 film All About Eve.

Links up with: Other Maugham books feature in this entry and this one. Click on the label below for more Dress Down Sunday entries.

The picture is by William Orpen and is called Sunlight. Another of his works illustrated this entry.