The Mystery of the Identical Dress

Cover Her Face by PD James 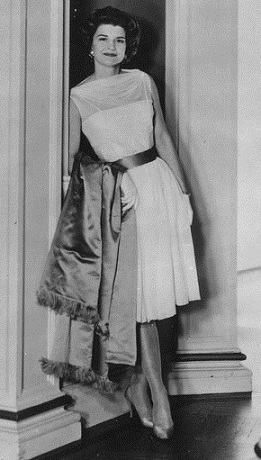 [The village fete is taking place at the home of the Maxie family, local grandees. Deborah is the daughter of the house, Catherine is a friend, Sally is the hired help - the house parlour-maid.]

The concentration of noise was so great that a sudden break in the clatter of voices seems to Catherine as if a total silence had fallen. Only afterwards did she realize that not everybody had stopped talking, that not every head was turned to where Sally had come into the [tea]tent by the opposite entrance, Sally in a white dress with a low boat-shaped neckline and a skirt of swirling pleats, identical with the one Deborah was wearing, Sally with a green cummerbund which was a replica of the one round Deborah’s waist, and with green ear-rings gleaming on each side of flushed cheeks.

Catherine felt her own cheeks redden, and could not help her quick inquiring glance at Deborah… ‘How dare she?’ she muttered... ‘It’s a deliberate insult.’

Deborah gave a slight shrug of her shoulders. ‘Oh I don’t know. What does it matter? Presumably the poor little devil is getting a kick out of her gesture and it isn’t hurting me.’

‘Where did she get the dress from?’

‘The same place as I did, I imagine. The name’s inside. It isn’t a model or anything like that. Anyone could buy it who took the trouble to find it. Sally must have thought it worth the trouble.’


observations: Back in 1962, PD James books were very different from the later versions. This, her first, was a classic village novel, set in a world that must have seemed a bit unreal even then: shortly after this the matriarchal Mrs Maxie is going to say ‘Sally you had better change back into your uniform.’ And Sally will say ‘Would that be appropriate, madam, for the girl your son has asked to marry him?’ Consternation. And murder will follow. But this is no Patricia Wentworth book. The setting is conventional, but the bitterness and hate in the book are very strange, and elitism and snobbery abound – not particularly with authorial disapproval.

But the really blessed thing about it is that it is a good, sour, short read. Later PD James books – and we know this is an unpopular opinion – are far too long, as she tries to show a whole world, and to give every passing dreary thought of Adam Dalgliesh a level of attention that James Joyce would have balked at. This book, and Shroud for a Nightingale, are much better.

Links up with: snobbish village life, and dresses, featured in this entry. A murder story with toffs in the village here . White dresses feature here and here. The title comes from the play The Duchess of Malfi, a performance of which featured in this book.

The photograph is of Betty Ford in 1962, from the US National Archives.
Adam Dalgliesh Cover Her Face James Joyce PD James Shroud for a Nightingale village white dress