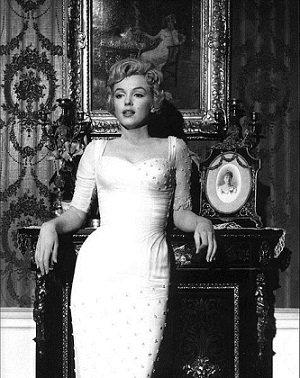 [Lewis is spending time with his mistress, before they both attend a party to celebrate his wife’s new movie]
They watched television together. Hours of afternoon soap operas, which Stephani loved, and Lewis found soothing. In the middle of one of these programmes, Stephani suddenly clasped his hand. She looked up at him, her eyes wide.
‘Oh, Lewis,’ she said. ‘The party. What shall I wear to the party?’
She wore a long white dress with a fish-tail skirt, covered in beads and sequins. She had washed the rinse out of her hair, and returned to the normal platinum. It blazed at Lewis across the room; he felt a simultaneous relief and disappointment: she had come as Stephani Sandrelli…
‘I remember Marilyn in a dress like that.’ [Top agent] Milton shook his head sadly. 'Tighter, even. She couldn’t go to the john. It was sewn on.’…
Lewis looked at Stephani uncertainly. Two months ago he would have said she looked like a tramp; two minutes ago, he would have said she looked wonderful; now he was not sure what he thought, but he felt distanced. He felt, possibly, that she was not the woman who should be seen on his arm that evening, regardless of gossip…

observations: James Joyce's Ulysses comes in at 930 pages, describing one day. Diarmuid McCullough took 1200 pages to cover the History of Christianity over, as he teasingly puts it, 3000 years. Destiny is 900 pages long and it covers some breach in the time-space continuum in which unreal people lead unreal lives, have impossible conversations, and take actions that defy belief.

Sally Beauman is a mysterious writer: it’s hard to believe that she wrote both this book, and her most recent, 2005’s The Landscape of Love (aka The Sisters Mortland). And why has she written nothing since then? Landscape is clever, literary, fascinating. Destiny has flashes of that, but most of it reads as though written to a plan – there is a lot of graphic sex (though that disappears in the final third or so), a lot of brand names, a lot of French words, and a lot of clothes. The character above could have been interesting – is she meant to be Marilyn Monroe or a substitute? Is there an Yves Montand/Simone Signoret meme in her relationship with the main couple? Is she meant to look good in this dress or not? You never really find out as the sweeping saga sweeps on. A book of missed opportunities.

Links up with: Trash classic Valley of the Dolls is a good read. The book mentioned above, Landscape of Love, has frequent nods to I Capture the Castle. More movie stars: the incredible Louise Brooks, the handsome Gary Cooper, and the aptly-named Louise Lovely.

The picture is a publicity still from the 1957 film The Prince and the Showgirl (the making of which formed the basis of the recent movie My Week with Marilyn) and can be found on Wikimedia Commons.