Dress Down Sunday: sunbathing wearing WHAT?

Posted by Clothes In Books on July 01, 2012
Dress Down Sunday

--- looking at what goes on under the clothes. 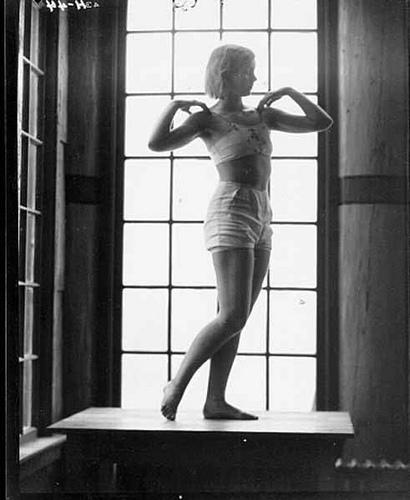 [Harriet Vane is visiting her old Oxford college in the 1930s, and is talking to a senior don about the students]

‘Well’ said Miss Lydgate, ‘we’ve got some very good people up, and they work surprisingly hard, when you think of all the outside activities they manage to carry on at the same time. Only sometimes I’m afraid they rather overdo it, and don’t get enough sleep at night. What with young men and motor-cars and parties, their lives are so much fuller than they were before the War – even more so than in your day I think. I’m afraid our old Warden would be very greatly disconcerted if she saw the college as it is today. I must say that I am occasionally a little startled myself, and even the Dean, who is so broad-minded, thinks a brassiere and a pair of drawers rather unsuitable for sun-bathing in the quad. It isn’t so much the male undergraduates – they’re used to it – but after all, when the Heads of the men’s colleges come to call on the Warden, they really ought to be able to get through the grounds without blushing. Miss Martin has really had to insist on bathing dresses – backless if they like, but proper bathing dresses made for the purpose, and not ordinary underwear.’

Harriet agreed that this seemed only reasonable.

observations: Really? REALLY? Sunbathing in public in your underwear? Having been puzzled by this slice of life since about 1974, Clothes in Books decided to show the extract to a current Oxford student journalist and ask her to comment. This is what she said:

“I would say it would still raise a few eyebrows, even in Wadham [College] which is supposedly the most liberal of the liberal. I suppose the new vogue for those strange bra-let tops means that people are effectively wandering around in underwear anyway, but I can't imagine anyone sitting on a quad in their bra and pants now... someone might possibly wear a bikini top I suppose. Maybe it was just hotter in the 1930s? This summer in Oxford you'd have barely been tempted to go outside, let alone strip off!”

So there you have it: fact-checking and original research.

Links up with: More from this book here, and Dorothy L Sayers features all over the blog, click on the label below. Some of these characters are studying in Paris in the same era as the book above, while Fiona is a more modern student in this entry – though none of them are taking their clothes off. More women students dithering about clothes in the 1940s and the 1960s. Dress Down Sunday started last week with Bridget Jones. Click on the label below to see.

The lady above is plainly sunbathing in the College Library rather than the Quad. The picture comes from the University of Washington digital collection.