Posted by Clothes In Books on July 08, 2012
Dress Down Sunday

- looking at what goes on under the clothes 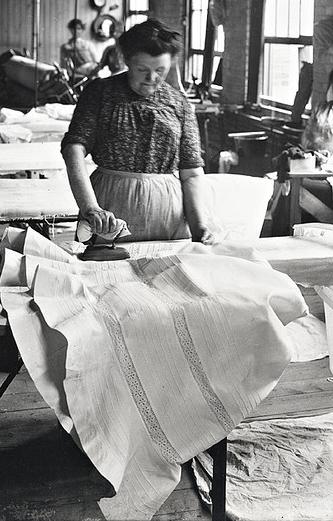 Her wellturned ankle displayed its perfect proportions beneath her skirt and just the proper amount and no more of her shapely limbs encased in finespun hose with highspliced heels and wide garter tops. As for undies they were Gerty's chief care and who that knows the fluttering hopes and fears of sweet seventeen (though Gerty would never see seventeen again) can find it in his heart to blame her? She had four dinky sets with awfully pretty stitchery, three garments and nighties extra, and each set slotted with different coloured ribbons, rosepink, pale blue, mauve and peagreen, and she aired them herself and blued them when they came home from the wash and ironed them and she had a brickbat to keep the iron on because she wouldn't trust those washerwomen as far as she'd see them scorching the things. She was wearing the blue for luck, hoping against hope, her own colour and lucky too for a bride to have a bit of blue somewhere on her because the green she wore that day week brought grief because his father brought him in to study for the intermediate exhibition and because she thought perhaps he might be out because when she was dressing that morning she nearly slipped up the old pair on her inside out and that was for luck and lovers' meeting if you put those things on inside out or if they got untied that he was thinking about you so long as it wasn't of a Friday.

observations: Gerty represents Nausicca from the Homeric Odyssey, a beautiful maiden whose fate is linked with Ulysses/Bloom, and to whom laundry is very important. Gerty is on Sandymount Strand thinking about her future and her prospects, and very much liking the idea of getting married. She and Bloom are aware of each other, silently, separated on the beach. Bloom stares at her and she pretends not to notice, but kicks her legs about to show them off. Nothing will come of this episode - in The Odyssey, too, Nausicca has the role of a might-have-been. The brickbat is presumably just a piece of brick to rest the iron on, although this usage does not seem to be general.

The language, in case you were wondering, is meant to be that of a women’s magazine or a sentimental novel.

Links up with: Ulysses was the entry for Bloomsday. Petticoats feature in Cold Comfort Farm.

Photo of woman ironing a starched petticoat, from 1901 – just a couple of years before Ulysses is set – comes from the McCord Museum in Montreal, via Flickr.