Posted by Clothes In Books on June 27, 2012
We have some Midsummer-themed entries to mark the days around the summer solstice 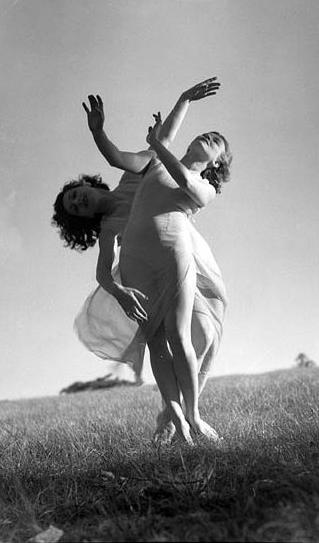 [Pauline and Petrova] were sent to a famous stage costume-makers and designers. As soon as [they] said who they were, large coloured pictures were produced, one marked ‘Pease-blossom’ and the other ‘Mustard-seed’. Pauline had hope their dresses would be the real fairy sort, with wings sticking up behind; but they were not a bit like that. They both had skin tights all over, Pauline’s in flesh colour and Petrova’s mustard, with queer turn-up-toed shoes to match. Round Pauline’s waist and over one shoulder were pink flowers; she had a wreath of the same flowers round her head. Petrova had nothing on beyond her tights, except a funny little hat. They both had silk wings that fastened to their shoulders and wrists, and and were so long that when they were walking they trailed on the floor like a train. Nana, who had taken them to the fitting, was disgusted and said so.

‘Fairies! Might just as well send them on stage in their combies!’

The dressmaker laughed. ‘Would you have liked frills, and tinsel, and wired wings, and wands?’

observations: Yes is obviously the answer here, for Nana and for the other domestic staff, who, when they see the play, think Petrova’s hat is ‘like the hat charabanc [= coach] parties wear on outings.’ Most of us, even if not lower-class, probably expect 1930s fairies to be very traditional, and even as a child I was surprised by this ‘modern’ costuming. Meanwhile the Royal Shakespeare Company has recently had punk fairies in Doc Marten boots, striped tights and ragged skirts Perhaps there is a secret sociological survey to be made in looking at the ways the fairies are dressed over the years, and how it reflects the society of the time – ‘Midsummer Night Dream Fairies’ makes for a fascinating Google Images search, as does a similar search for RSC MND.

Links up with: The girls auditioned in pretty white dresses, and there are no costume issues for Puck. Stephen Greenblatt looks at Shakespearean costumes here.

The photograph (from the State Library of New South Wales) is of two dancers in a Sydney Park – one fears poor Petrova (who almost loses the part during rehearsals) was never quite so perfectly elegant in her moves.
Ballet Shoes costumes fairies Fossil sisters Midsummer Night's Dream Noel Streatfeild Royal Shakespeare Company RSC Shakespeare