Posted by Clothes In Books on June 25, 2012
We have some Midsummer-themed entries to mark the days around the summer solstice

The Great Night by Chris Adrian 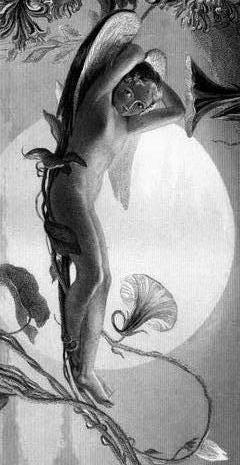 [Puck is being described]

What you saw depended on how you were feeling; he was often the image of one’s worst fear or most troubling anxiety. To some of the faeries he looked like a naked boy with a luxurious Afro, and only the height of the boy or the width of the Afro changed from eye to eye. But some saw him as a sliver of flame, or a blackness heavier and darker than the black air, or a fluttering pair of dark wings, and some saw him as an image of their Queen only even more depressed, dishevelled and defeated-looking. In every form he wore a chain, sometimes made of tiny silver acorns or leaves of twisted silver grass. Sometimes the chain was made of thick links of silver manacle, and sometimes it was just silver glints upon the air or the fire. The chain had been placed there by Oberon a very long time ago, so long ago that no-one but the Queen remembered the true particulars of the binding, though the battle was a story they all had once sung under the hill and one they celebrated every Midsummer’s Eve.

observations: This is the perfect Midsummer book, taking the plot of Shakespeare’s Midsummer’s Night Dream, mangling it, then rebuilding it in an utterly compelling way – fairies and humans wandering around a park in San Francisco (Buena Vista Park, which really exists), slowly revealing everyone’s backstories. It has that air of mystery and magic pertaining to a night when you stay up till dawn, it reminds you of being young and thinking anything could happen. It is quite a harsh book in some ways, and not all the strands work equally well. There is an absolutely extraordinary section about a couple (who happen to be Titania and Oberon) with a terminally ill child – Chris Adrian is a paediatrician – which is so real and moving that it is hard for the rest of the book to live up to it. But it’s still highly recommended, and the hardback edition is very beautiful.

Links up with: more midsummer books, such as this one and this one - or click on the label below.

The description sounded more like a vicious Ariel than Puck, and this illustration is from The Tempest in a 19th Century edition of Shakespeare.
Ariel Chris Adrian Great Night midsummer Midsummer Night's Dream Oberon Puck Shakespeare The Tempest Titania