A Buyer's Market by Anthony Powell

Because it was Queen Elizabeth's Diamond Jubilee in the UK, we did a weeksworth of books with a first publication date of 1952. As these entries were so popular, we've found a few more to feature. 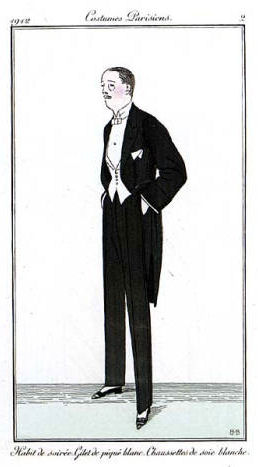 Even Archie Gilbert, who had immediately preceded me in the hall – he had never been known to be late for dinner – looked that night as if he might be feeling the heat a little. His almost invisibly fair moustache suggested the same pique material as the surface of his stiff shirt; and, as usual, he shed about him an effect of such unnatural cleanliness that some secret chemical process seemed to have been applied, in preparation for the party, both to himself and his clothes: making body and its dazzling integument, sable and argent rather than merely black and white, proof against smuts and dust. Shirt, collar, tie, waistcoat, handkerchief and gloves were like snow: all these trappings, as always apparently assumed for the first time: even though he himself looked a shade pinker than usual in the face owing to the oppressively climatic conditions.


observations: Archie Gilbert is in non-ferrous metals, and goes to all the debutante dances – in fact he is such a socializer that narrator Nick Jenkins wonders if the job is perhaps a polite fiction, because how could he find the time to work as well? But a few pages later there is a gleam in Archie’s eye when mineral deposits are mentioned, so perhaps he does work after all. The book has – like many of Powell’s series (this is the second of the 12-volume Dance to the Music of Time sequence) – very long detailed descriptions of a number of social events, going on in real time, a bit like the film Titanic. The parties are greatly contrasted. There is a dinner to precede a dance, then the dance, both highly respectable, and then a much more louche affair at Milly Andriadis’s – but still with many of the guests in evening dress.

People either love these novels or are dismayed by them. They are elitist, snobbish and quite racist, but they present a picture of a certain sort of life in England from the 1920s through to the 1970s, and are very entertaining. Anthony Powell is excellent on gossip and analysing a social event, and on very real-sounding conversations and jokes, even if the milieu is totally unfamiliar. He is shameless about presenting these simple matters as an entertainment, but also finding something more meaningful in them.

Links up with: The Great Gatsby features fancy shirts and evening clothes. Nancy Mitford’s Fanny and Polly go to dinners and dances. Lord Peter Wimsey is reputed to look good in evening dress.

The picture is from Wikimedia Commons.