A young woman with true grit 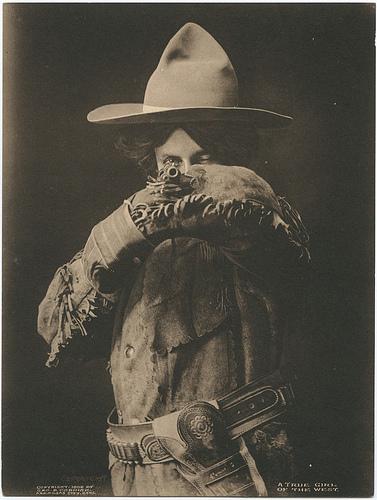 [14 year old Mattie Ross is seeking to avenge the murder of her father in Arkansas, and is about to set off with her ally Rooster Cogburn]

I rolled up the blankets with the sack of food inside and then wrapped the slicker around the roll and made it fast with some twine. I put Papa’s heavy coat on over my own coat. I had to turn the cuffs back. My little hat was not as thick and warm as his so I traded. Of course it was too big and I had to fold up some pages from the New Era and stick them inside the band to make for a snug fit. I took my bundle and my gun sack and left for the stock barn…

I could see no good place to carry the pistol. I wanted the piece ready at hand but the belt was too big around my waist and the pistol itself was far too big and heavy to stick in the waist of my jeans. I finally tied the neck of the gun sack to the saddle horn with a good knot the size of a turkey egg.﻿
observations: There’ve been two very successful, and quite different, films of this book, and both are very enjoyable. But no film could possibly do justice to Mattie’s peculiar voice and tone, consistent and hilarious throughout the book – she is narrating it in her old age, an unmarried wealthy lady who owns a bank (“I would marry an ugly baboon if I wanted to and make him a cashier”) and has forthright opinions. She had them at 14, too, and this book is one you can read over and over and notice new turns of phrase and strange locutions every time. And after reading it you tend to talk like Mattie for a day or so. “Keep your seat, trash!” is at all times a useful phrase.

Links up with: young female narrators with distinctive voices, here and here. The Hunger Games’ Katniss was daring, brave and strong – we asked in this entry for a comparable female heroine, and perhaps Mattie is the one.
Chosen for another Mattie, for her birthday.

The picture is from the Southern Methodist University archives, via Flickr.