The voice of wild things and dressing up 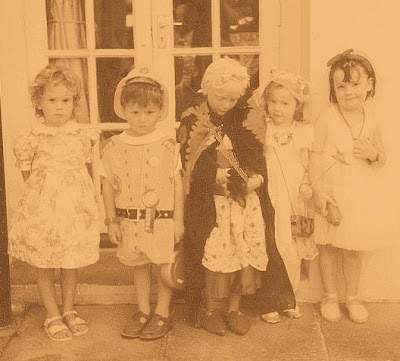 BAM! BAM! BAM! came the sound of a drum from behind the cellar door.

“Ladies and gentlemen!” shouted a faraway voice “We have for your pleasure Cha-Charoo, the Arabian dancing girl. Clap and shout hooray!”

Everybody shouted and clapped. The cellar door opened and Kathy stepped out. She wore a nightgown and had a towel over her head. She waved her arms and took three little steps. “Cha-charoorooroo” she sang softly. “That’s enough!” cried the voice from behind the cellar door. “Clap everybody and shout hooray.”…

The cellar door opened and out came Alinda. She wore a hat with feathers sticking out, a lady’s dress, and high-heeled shoes.

“Hello everybody” someone said. Everybody turned and saw Lenny wearing a fireman’s hat.

“We’re not playing” Alinda shouted. “It’s a real show and you can’t.”

observations: Maurice Sendak, who lived with the legacy of the worst of the 20th century and turned it into the most wonderful books for children, died this week. Where the Wild Things Are is, deservedly, his most famous book – there is something complete and perfect about the story of Max. But The Sign on Rosie’s Door is another favourite.

The book was published in 1960, and that was very mystifying, because how could it have been written so long ago? The heroine lived in our house (under a different name) so many years later and the story of the show in the book was acted out regularly, apart from perhaps the names being changed. Rosie kindly organizes the show for the benefit of the whole world, but like all the great artistes and showbiz entrepeneurs, she suffers when not everyone co-operates.

You can see Meryl Streep reading this story to great effect on YouTube.

Links up with: children dressing up here. The Ballet Shoes children knew how to put on a show, and Mockingbird’s Scout appeared in a pageant.

The picture shows Alinda, the lovely lady singer, along with Cha-charoo, Lenny the fireman and others.

With thanks to Jackie, who first gave us the book and pointed out the resemblance.
Maurice Sendak Meryl Streep The Sign on Rosie's Door Where the Wild Things Are