Trying not to get your dress wet

Three Men in a Boat by Jerome K Jerome 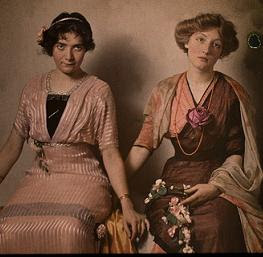 Girls, also, don't look half bad in a boat, if prettily dressed. Nothing is more fetching, to my thinking, than a tasteful boating costume. But a "boating costume," it would be as well if all ladies would understand, ought to be a costume that can be worn in a boat, and not merely under a glass-case. It utterly spoils an excursion if you have folk in the boat who are thinking all the time a good deal more of their dress than of the trip. It was my misfortune once to go for a water picnic with two ladies of this kind. We did have a lively time!

They were both beautifully got up — all lace and silky stuff, and flowers, and ribbons, and dainty shoes, and light gloves. But they were dressed for a photographic studio, not for a river picnic. They were the "boating costumes" of a French fashion-plate. It was ridiculous, fooling about in them anywhere near real earth, air, and water.

The first thing was that they thought the boat was not clean. We dusted all the seats for them, and then assured them that it was, but they didn't believe us. One of them rubbed the cushion with the forefinger of her glove, and showed the result to the other, and they both sighed, and sat down, with the air of early Christian martyrs trying to make themselves comfortable up against the stake. You are liable to occasionally splash a little when sculling, and it appeared that a drop of water ruined those costumes. The mark never came out, and a stain was left on the dress for ever….﻿

observations: And the scene goes on in a fairly predictable way, ending in the young women being made to do the washing-up, to their great disgruntlement, lying on the bank swishing the dirty crockery in the river. But at least JKJ is even-handed about men’s and women’s vanity and dress, as we have seen previously.

Three Men in a Boat was such a huge success that JKJ followed it up with a sequel – Three Men on the Bummel, about a bicycling tour of Germany. (A Bummel is described in the book as ‘a journey long or short, without an end; the only thing regulating it being the necessity of getting back within a given time to the point from which one started’. Whether it is a real word I have been unable to ascertain.) It is funny too, but just doesn’t have the magnitude of the first one, though apparently was very popular in Germany. There are lots of random observations about Germans, including the prediction that Germans will end up speaking English quite soon, and a claim that Germans like dogs, but only china ones. There is also the revelation that cocoa adverts always show scantily-clad women, and an idea for preventing war: an outrageously stereotypical British couple are wandering around Germany – actually out-of-work actors – being so entertaining that it is thought the local populace will be convinced that ‘war with such would be absurd.’ Sadly the stratagem didn’t work – as the descriptions of long-lost Dresden and Prague remind us.

Links up with: Troubles on board ship feature here and here. JKJ might agree with Uncle Alec in Eight Cousins (and of course with Louisa May Alcott) about rational dress – several entries, but this is the highly-popular corset one.

The picture is from George Eastman House via Flickr.
boating Eight Cousins Jerome K Jerome Three Men in a Boat Three Men on the Bummel