The last days of disco

Tales of the City by Armistead Maupin 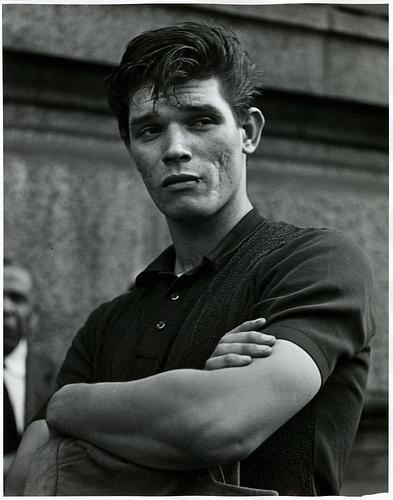 [Brian, young (32) single and straight, is feeling bored with life, and planning a night out, hoping to meet someone]

He climbed into the shower and sublimated his sex drive in a Donna Summer song. So what would it be tonight? Henry Africa’s. It was far enough away from Perry’s and Union Street to provide at least token escape…

He couldn’t get into it. He was dying of fern poisoning. OD-ing on Tiffany lamplight. He was sick of the whole plastic-fantastic scene. But where else….?

Perfect! He towelled off hurriedly and climbed into corduroy levis and a gray-and-maroon rugby shirt. Why the hell hadn’t he thought of it before?﻿

observations: The Come Clean Center, in case you haven’t guessed, is a laundromat (UK = launderette) and, apparently, a great place to pick up women. When this series of books started – as regular articles in a San Francisco newspaper – there was a lot of emphasis on the lifestyles of the young and single, and the places they met, and the roots of the book lay in the Marina Safeway as pickup spot. As the books moved on, the characters became more important, more rounded, less single-trait. And in Brian’s case a lot less horrible.

Armistead Maupin’s early books were as much a part of the disco era as Donna Summer, who died this week – he had some great scenes set there, and we are sad that we haven’t been able to find a picture to illustrate Connie ‘bumping with a black man in Lurex knickers and glitter wedgies.’ (UK readers should note that knickers would be knickerbockers rather than underwear. But still…) The books are funny and very much of their time, and we read the first ones with melancholy nostalgia, knowing AIDS was just around the corner.

Thanks to Colm for the idea.

Links up with: Lucia’s husband Georgie knows how to dress up; whereas the stepmother in I Capture the Castle chooses to dress down. The three men in a boat take their clothes seriously.

The photo is by James Jowers and is held at George Eastman House. His pictures have featured before, here and here.
AIDS Armistead Maupin; Tales of the City disco Donna Summer San Francisco