Rites of Passage by William Golding 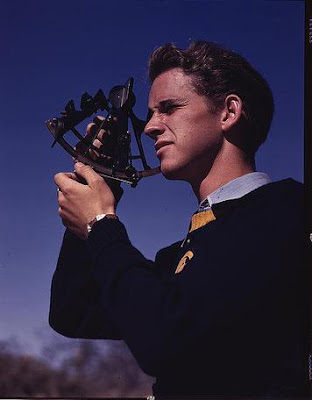 [Edmund Talbot is a passenger on a ship travelling from England to Australia. He is being shown round by a young midshipman.]

“When shall I see you [take an observation]?”

“Why, at noon, in a few minutes. There will be Mr Smiles, the sailing master, Mr Davies and Mr Taylor, the other two midshipmen sir, though Mr Davies does not really know how to do it for all that he is so old and Mr Taylor my friend, I beg you will not mention it to the Captain, has a sextant that does not work owing to his having pawned the one that his father gave him. So we have agreed to take turn with mine and give altitudes that are two minutes different.”

I put my hand to my forehead. “And the safety of the whole hangs by such a spider’s thread?”

“Our position, my boy! Good God, we might as well be in the hands of my young brothers! Is our position to be decided by an antique midshipman and a sextant that doesn’t work?”﻿

observations: We’re really pushing it today – the justification is that accessories do count for Clothes in Books, so we’ve decided that sextants count as accessories. This book combines being very funny with being quite horrific and disturbing, and does show off William Golding’s ability to write convincing characters. To call Talbot an unreliable narrator is to simplify too much: he is someone learning his lessons, rather – as the title indicates. The book is the first of a trilogy, though there can be a feeling of diminishing returns in the later books, this one seemed complete in itself.

Links up with: There’s something about protagonists at sea, and the closed world, and the opportunities to behave badly: see Evelyn Waugh’s Gilbert Pinfold. Rites of Passage beat Anthony Burgess’s Earthly Powers to win the Booker Prize in 1980.

The photo is from the Library of Congress.
Booker Prize Rites of Passage sextant ship William Golding