Going mad on board ship: The Box 1

The Ordeal of Gilbert Pinfold by Evelyn Waugh 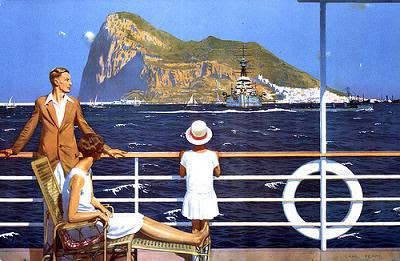 [Gilbert Pinfold, a middle-aged novelist, is on a cruise ship which is about to go through the straits of Gibraltar into the Mediterranean]

At table Captain Steerforth carried his anxieties with splendid composure. Mrs Scarfield actually asked him: ‘When do we go through the straits?’ and he replied without any perceptible nuance: ‘Early tomorrow morning.’

‘It ought to get warmer then?’

‘Not at this time of the year,’ he answered nonchalantly. ‘You must wait for the Red Sea before you go into whites.’…

[Some time later he reaches his destination] Ceylon was a new country to Mr Pinfold but he had no sense of exhilaration on arrival. He was tired and sweaty. He was wearing the wrong clothes. His first act after leaving his luggage at the hotel was to seek the tailor Glover had recommended. The man promised to work all night and have three suits ready for him to try on next morning…

The three suits were pale pinkish buff (‘How smart you look’ cried Margaret); they were not entirely useless. He wore them on successive days…﻿

observations: Not one of the better-known Waugh books nowadays, and with good reason. Evelyn Waugh in the 1950s went through a very peculiar experience as a result of mixing sleeping drugs and alcohol: he went on a sea voyage and conjured up a whole family who were tormenting and threatening him, he could hear voices and plots. As soon as he stopped taking the drugs, the problem ended. This novella, openly based on his experiences, is a most uncomfortable read. To take just one example: Waugh often referred to his daughter Margaret as his favourite. In the book, the only member of the (imaginary) cruel family who is at all nice to him is called Margaret, and there is an indescribable scene in which Pinfold imagines that ‘Margaret’ is being sent in to his cabin to sleep with him – pimped out by the rest of her family. It is close to unreadable. Of course, the whole thing is very well-written, he is a master stylist, but it’s hard to know what could have possessed him to lay himself bare in this way.

Gilbert Pinfold is convinced that all his troubles are tied up with a mysterious item called The Box, a weird craze in the 1950s, whereby people tried to influence the lives of others using ‘life-waves’. Hair or blood from the ‘subject’ was needed – the Box combined elements of spiritualism, voodoo, and modern pseudo-science in an extraordinary way. It’s almost forgotten now, but turns up in books of the 1950s.

Links up with: Evelyn Waugh featured here. More of The Box to come. The Provincial Lady dresses for her holiday.

The picture is from the National Archives of the UK, and was an illustration for the Empire Marketing Board. Presumably the idea was to stress the warmth, and to bring out whites and linen a long time before Captain Steerforth – and what a fine Dickensian name that is for the captain - suggests.
cruise Evelyn Waugh Gibraltar holiday Ordeal of Gilbert Pinfold ship The Box