Clothes for walking the moors with a 'queer common boy' 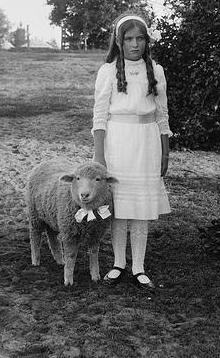 [Orphan Mary has arrived at her new home, and met the maid Martha]

When Mary at last decided to get up, the clothes Martha took from the wardrobe were not the ones she had worn when she arrived the night before with Mrs. Medlock.

She looked the thick white wool coat and dress over, and added with cool approval:

"Those are nicer than mine."

"These are th' ones tha' must put on," Martha answered. "Mr. Craven ordered Mrs. Medlock to get 'em in London. He said `I won't have a child dressed in black wanderin' about like a lost soul,' he said. `It'd make the place sadder than it is. Put colour on her.' Mother she said she knew what he meant. Mother always knows what a body means. She doesn't hold with black hersel'."

"I hate black things," said Mary...
Before she was ready for breakfast she began to suspect that her life at Misselthwaite Manor would end by teaching her a number of things quite new to her -- things such as putting on her own shoes and stockings, and picking up things she let fall.﻿
observations: Bad-tempered Mary is going to meet Dickon, Martha’s brother, a ‘queer common boy’ who has a way with animals, and he will introduce her to a lamb. Hidden in the house is spoilt sickly Colin, who is then able to gives this splendid and lordly order to the nurse:

"A boy, and a fox, and a crow, and two squirrels, and a new-born lamb, are coming to see me this morning. I want them brought upstairs as soon as they come," he said. "You are not to begin playing with the animals in the servants' hall and keep them there. I want them here."

Frances Hodgson Burnett has already featured in the blog with A Little Princess, another orphan: FHB doesn’t hold back on the deaths of parents, and the opening chapter of Secret Garden is horrible and strange as Mary is found in her Indian home, the only survivor of a cholera outbreak. The book has a perfect journey structure - from India to England, from hot and unhealthy to cold and bracing, from cold winter to spring and summer, from bad-temper to good behaviour. There is a rather feeble attempt at a villain (a cousin who will inherit if Colin doesn’t survive), but even that never becomes serious. Everything is for the best in this best of all possible worlds, and they must cultivate their garden. So - there isn’t much challenging of the class system in the book, and the fascinating Dickon will always be poor, while horrid Colin will inherit the Manor and boss everyone around. And perhaps marry Mary in the future?

Links up with: The garden of the Finzi-Continis, here and here, garden metaphors here, and of course A Little Princess here.

The photo is from the Powerhouse Museum collection, featured on Flickr.
A Little Princess Frances Hodgson Burnett lamb mourning The Secret Garden