Bring up the Bodies by Hilary Mantel 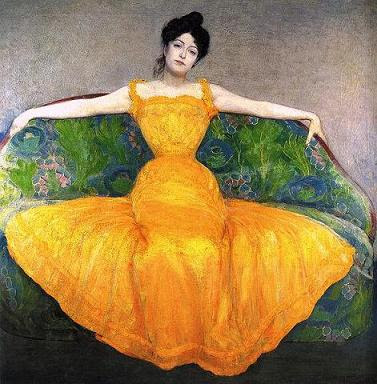 Anne the Queen wears yellow, as she did when she first appeared at court, dancing in a masque: the year, 1522. Everyone remembers it, or they say they do: Boleyn’s second daughter with her bold dark eyes, her speed, her grace. The fashion for yellow had started among the wealthy in Basle; for a few months, if a draper could get hold of it, he could make a killing. And then suddenly it was everywhere, in sleeves and hose and even hairbands for those who couldn’t afford more than a sliver. By the time of Anne’s debut it had slid down the scale abroad; in the domains of the Emperor you’d see a woman in a brothel hoisting her fat dugs and tight-lacing her yellow bodice.

Does Anne know this? Today her gown is worth five times the one she wore when her father was her only banker. It is sewn over with pearls, so that she moves in a blur of primrose light. He says to Lady Rochford, do we call it a new colour, or an old colour come back? Will you be wearing it, my lady?

She says, I don’t think it suits any complexion, myself. And Anne should stick to black.﻿

As in the previous excerpt, protagonist Thomas Cromwell is shown bringing his values and knowledge as a trader to the table, and he is always shown as having an understanding that the history of women is hidden, but key to the history of the world, and to his own rise to power.

From the arresting opening line – ‘His children are falling from the sky’ – it is a wonderful book. Sadder and darker and harsher than the first one, and with one change. The first had an oddity that you had to work out: if Mantel began a sentence with ‘he said’ – ‘he went’ – ‘he thought’, then the subject was Thomas Cromwell, even if the previous sentence suggested it might be someone else. This was satisfying to work out and work with, but caused complaints, and regrettably this time around she often says: ‘He, Thomas Cromwell, shrugs’ – ‘He, Thomas Cromwell, stands very well…’.

And more for readers who wanted to feel clever: the book makes good on the incidents early in Wolf Hall, where anyone who knew the historical details of Boleyn’s downfall could see a Mantel-plot-device developing, just casually thrown in without too much attention.

Links up with: Wolf Hall, of course. More yellow fabulousness for young ladies here and here. There’s a woman refusing to mourn in this entry – but check the date.

More than 300 years later, a yellow dress still suits a beautiful dark girl. The picture is by the Viennese artist Max Kurzweil, dates from 1899, and can be found on Wikimedia Commons.
Anne Boleyn Bring up the Bodies Henry VIII Hilary Mantel Thomas Cromwell Wolf Hall yellow