Reverent, not religious: Easter and Passover

published 2000    Section: The order of the Seder, Saturday 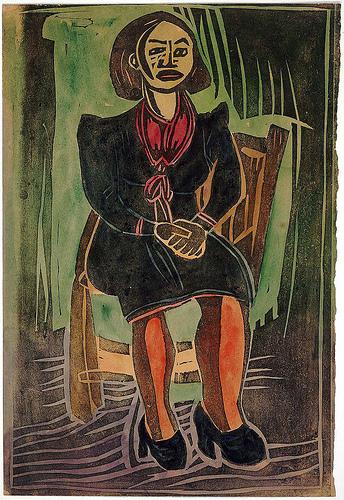 
Trudy wears her black dress. ‘All you need is one good black dress’ Madge used to say. ‘A pendant here, and you’re at a cocktail party; a scarf there and you’re at a funeral.’ Trudy never goes to cocktail parties… For this evening she has added a white shawl pinned by a Celtic cross. The design may be inappropriate, but it is the only brooch that she has. She trusts that the shape and decoration will offset any offence. Its curved sides and artificial rubies bear as much resemblance to the austerity of the Crucifixion as she does to a lifelong Christian. There can be no more fitting relic of her ornamental faith.

She sits at the table, a licensed intruder, while children who have been told not to stare at her, peep. Jessica Grieve [the vicar's wife] has arranged for her to celebrate Passover with the family of a colleague from the Citizen’s Advice Bureau. She feels that she is being slotted into other peoples’ idea of a resolution, but she doesn’t object. On the contrary, she puts herself into their hands as though they were doctors. ‘You’ll like the Waxes’, Jessica promised. ‘They’re reverent rather than religious. They observe all the traditions you knew as a child.’﻿

observations:
Trudy has lived most of her life as a Christian: in fact she was a Jewish refugee who came to England during the Second World War. The novel is set during Holy Week – the week in the Christian calendar leading up to Easter Sunday – and follows the intertwining lives of a whole set of people in London. Trudy, after 50 years’ silence, has revealed her background in church. She, the reader hopes, will come out the other side. The book is arranged round a series of church services, and – symbolic of Easter – many characters will reach a turning-point in their lives. It is a serious but often funny book – the scenes at a Baptism are particularly winning – ‘such a coup to get the Bishop [to perform it]'…'Only London, not Canterbury'...'Angela Hutchinson only managed the Dean of Windsor for her grandson’. The child of a lesbian couple is being baptized, and the grandfather of another baby realizes this and says ‘I won’t have my grandson dipped in the same water as her child.’ The book (along with Arditti’s others) has a strong gay sensibility, and is not always for the faint-hearted, but gives a fine picture of church, religions, faiths and the faithful in all their fullness – good and bad, with a note of ecumenical hope amid the well-described stresses and strains of modern life.

Links up with: Michael Chabon - yesterday's blog entry - has a wonderful description of a Passover meal in his Wonder Boys.

The picture, Sitting Model by the great artist William H Johnson, is from the Smithsonian Institute collection, and has been made available on Flickr.
Easter Holy Week MIchael Arditti Passover religion