[Harriet Vane is visiting her all-women college at Oxford University. Her colleagues on the teaching staff are gathered for tea.]

She gazed with interest from the Senior Common Room window, teacup in hand.

“Who is this incredibly beautiful young man?”

“Don’t be ridiculous” said the Dean. “I know Flaxman’s Byron by heart. This is an ash-blond in a House blazer.”

“Why all the excitement anyway?” asked Miss Hillyard.

“That,” said Harriet, at length getting a glimpse of the wonder-youth over Miss Pyke’s shoulder, “is Viscount Saint-George.”…

Lord Saint-George stood, with a careless air of owning the place… his eye roving over a group of Shrewsburians a-sprawl under the beeches like that of a young Sultan inspecting a rather unpromising consignment of Circassian slaves. 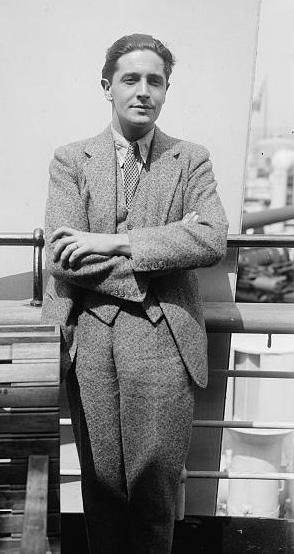 Observations: Specially chosen as it is St George’s day. Viscount Saint-George is the nephew of Lord Peter Wimsey, and is a student at the University - the ‘House’ blazer indicates that he is at Christ Church college. Gaudy Night should by all standards be a tiresome book. There is no murder, and when the culprit for the various vandalistic crimes is revealed it is not at all convincing that her revenge would  take this form. There are endless scenes where DLS puts her own opinions into approved characters’ mouths, and then has (less clever and attractive) others arguing with those views and being defeated.
But the book has a special place in the affections of hard-core fans of Dorothy L Sayers – even though there are also long descriptions of the day-by-day running of a women’s college in the 1930s, and the social AND intellectual snobbery run unchecked. Good sociological interest, as we like to say when we can’t really explain why we like books. Young Saint-George has met the villain of the book in strange circumstances, and has come to the college see if he can recognize her. Another of the dissatisfactions of the book is that this villain is able to appear perfectly normal 99% of the time, but is completely babblingly deranged when Saint-George meets her – twice. The young man is a charmer, and though he is intended to appear rather callow, spoilt and immature compared with DLS’s revered Lord Peter, he actually makes a refreshing change.

Links up with: Dorothy L Sayers books in this blog entry and this one (for pointed remarks about why we don’t like Lord Peter), Kingsley Amis for St David’s Day, James Joyce for St Patrick’s Day. The young lord is blond, as Holly Golightly wouldn’t be in the UK.