The Way We Live Now by Anthony Trollope 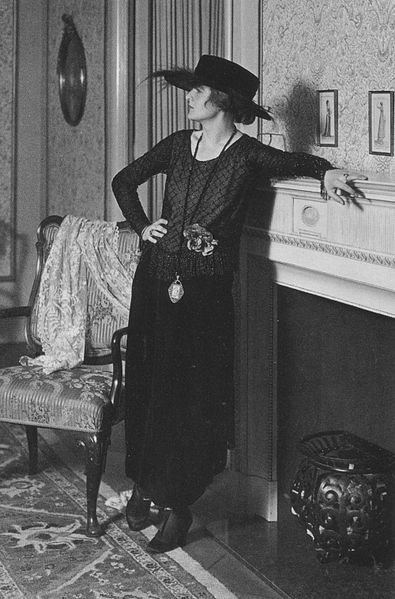 [Paul has invited Mrs Hurtle – possibly a widow, possibly divorced - to dine and go to the theatre with him: his note includes this:‘The Thespian is a good sort of place, and lots of ladies dine there. You can dine in your bonnet.’]

Mrs Hurtle came to him out of her bedroom, with her hat on her head. Nothing could be more simple than her dress, and nothing prettier. It was now June, and the weather was warm, and the lady wore a light gauzy black dress,—there is a fabric which the milliners I think call grenadine,—coming close up round her throat. It was very pretty, and she was prettier even than her dress. And she had on a hat, black also, small and simple, but very pretty. There are times at which a man going to a theatre with a lady wishes her to be bright in her apparel,—almost gorgeous; in which he will hardly be contented unless her cloak be scarlet, and her dress white, and her gloves of some bright hue,—unless she wear roses or jewels in her hair…But there are times again in which a man would prefer that his companion should be very quiet in her dress,—but still pretty; in which he would choose that she should dress herself for him only. All this Mrs Hurtle had understood accurately; and Paul Montague, who understood nothing of it, was gratified. "You told me to have a hat, and here I am,—hat and all." She gave him her hand, and laughed, and looked pleasantly at him, as though there was no cause of unhappiness between them. ﻿
observations: Mrs Hurtle is a splendid character: she is American, and scathing about some of the customs in England. She is also known to have killed a man in Oregon. Hilariously, young Paul – who is engaged to her – is scared to break off the engagement in case she shoots him, and his solemn thoughts about their relationship are always interrupted by his terrors on this matter, the word Oregon becoming almost a codeword for this fear - ‘Paul at the moment thought of the gentleman in Oregon, and of certain difficulties in leaving.’ She threatens to horsewhip Paul, and also takes a firm line with Sir Felix in the business with Ruby – this blog entry.

She is much the best female character in the book, and one can only think that Trollope could have done much better to follow women like her. He seems to disapprove, but not to be able to hide a soft spot for her. Marie Melmotte, another of the women, starts the book not very impressively, but half way through Trollope suddenly changes her character dramatically – there is an odd moment where everything has gone badly wrong for Marie. She is being accompanied by a ‘gentleman’ who is never named and doesn’t otherwise feature – but she laughs, and ‘the gentleman thought that Miss Melmotte would be able to get through her troubles without much suffering.’ It’s an unlikely change, but it makes for a much more interesting character.

Grenadine is a light silk with an open-textured weave.

Links up with: A previous visit to this book, here, and a trip to the theatre for a younger lady here.

The photo is a fashion shot of a German actress called Anita Berger, and came from Wikimedia Commons
.
Anthony Trollope hat The Way We Live Now theatre