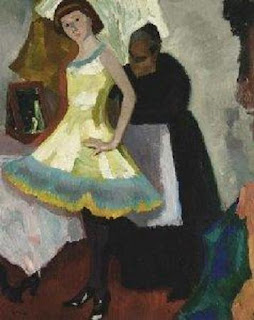 [The Forbes children, part of a theatrical dynasty, are going to the first night of their grandmother’s new play in wartime London – but clothes and money are a big problem]

“If we had the coupons I don’t think I should need any extra money,” declared Sorrel. “I could buy a utility frock. That dress that Mary had for her audition was utility and I thought it looked awfully nice.”

[Holly said] “I don’t think you wear things like that for first nights. When Alice told me about them she said all the ladies wore satin and velvet and diamonds and foxes, and all the gentlemen had top hats and black tails…”

“It’s a party dress I want – something that would rustle and stick out… Suppose it could be yellow. Crepe de chine or silk net over taffeta…”

[But because of money and rationing – coupons – there is no prospect of Sorrel getting such a dress. But then Sorrel talks to her Aunt Lindsey:]

Aunt Lindsey got up. “You come with me, Sorrel. If there was one thing I was extravagant about before the war it was evening dresses, and I’m a very good dressmaker. Let’s see what we can find.”…

[The big night arrives:] Aunt Lindsey had made it beautifully. Moreover she had not only made the frock, but she had also sent some yellow ribbon … for Sorrel to tie on her hair… “I shouldn’t think there was ever a prettier dress in this room, would you?”


Poor 12 year old Sorrel has an earlier social occasion when she does NOT have the right frock. Kindly Alice is a theatrical dresser (“an understudy thrown on in a hurry was the breath of life to her”): she looks at Sorrel and says ‘Well there’s a war on and you’re at least covered and I suppose we mustn’t expect more.’ And then the author says ‘Which the more you thought about it, became the less encouraging.’ This reader had only undetailed memories of the triumphant successful dress later, but those two sentences were produced verbatim from memory after 30+ years, having made a huge impression on a similarly-aged girl (not in wartime), imagining going into a family event with those words ringing in her ears after hoping for a  compliment.
So let’s just be happy for Sorrel – a real Streatfeild heroine, who gets her moment. NS is very good on clothes panics (she is certain to feature more in the blog) and always provides a satisfactory ending in the garment line, not too fairy-tale-ish, but nice for her readers to imagine.
Links up with: Several of NS’s books were renamed to include ‘Shoes’ in the title, to bring them in line with the mega-successful original, Ballet Shoes – this blog entry here. It is very reasonable in this case, as the children go to Madame Fidolia’s Academy, there is news of the Fossils, and other characters from Ballet Shoes appear.
The picture is called Woman in Evening Dress by Kees Maks, a Dutch painter, and is on Wikimedia Commons.