We've all known someone like YOU, you George Eliot heroine

When it had been decided that as a touch of color on her white cashmere, nothing, for her complexion, was comparable to pale green—a feather which she was trying in her hat before the looking-glass having settled the question—Mrs. Davilow felt her ears tingle when Gwendolen, suddenly throwing herself into the attitude of drawing her bow, said with a look of comic enjoyment—

"How I pity all the other girls at the Archery Meeting—all thinking of
Mr. Grandcourt! And they have not a shadow of a chance."…

Mrs. Davilow, piqued into a little stratagem, said, "Oh, my, dear, that is not so certain. Miss Arrowpoint has charms which you have not."

"I know, but they demand thought. My arrow will pierce him before he has time for thought”… 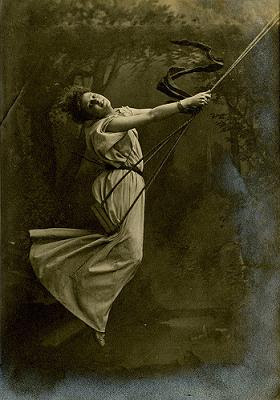 [Later that day] "I wish I were like [Catherine Arrowpoint]," said Gwendolen.

"Why? Are you getting discontented with yourself, Gwen?"

"No; but I am discontented with things. She seems contented."

"I am sure you ought to be satisfied to-day. You must have enjoyed the shooting. I saw you did."

"Oh, that is over now, and I don't know what will come next," said Gwendolen, stretching herself with a sort of moan and throwing up her arms. They were bare now; it was the fashion to dance in the archery dress, throwing off the jacket; and the simplicity of her white cashmere with its border of pale green set off her form to the utmost. A thin line of gold round her neck, and the gold star on her breast, were her only ornaments. Her smooth soft hair piled up into a grand crown made a clear line about her brow. ﻿


Flinging herself backwards, waving her bare arms around – yeah, we’ve all known a Little Miss Drama Queen like Gwendolen. If there’d been a swing at the party she’d have been jumping on it too, with all the men staring at her, and she’d be saying "oh I wish I were more like Catherine, oh why is everyone looking at me?"

"Was she beautiful or not beautiful? and what was the secret of form or expression which gave the dynamic quality to her glance? Was the good or the evil genius dominant in those beams? Probably the evil; else why was the effect that of unrest rather than of undisturbed charm?"

She is gambling in a casino at the time. It’s a long way from goody goody Fannie Price in Jane Austen's Mansfield Park (60 years earlier). And in fact it is pretty clear that Gwendolen, like Scarlett O’Hara, IS beautiful – and that is what she has to offer against the Arrowpoint riches. When they first meet, George Eliot clearly intends us to understand that Catherine suffers from the comparison: “Miss Arrowpoint, unfortunately also dressed in white, immediately resembled a carte-de-visite in which one would fancy the skirt alone to have been charged for.” Does anyone have any idea what that means?
More about the romantic rivalry between the two women in this blog entry.

The picture is from the UK National Archives, and is featured on Flickr.