Sunday on the River with J, and two other men

Three Men in a Boat by Jerome K Jerome 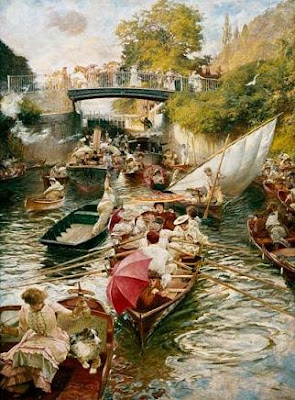 I have stood and watched [the lock], sometimes, when you could not see any water at all, but only a brilliant tangle of bright blazers, and gay caps, and saucy hats, and many-coloured parasols, and silken rugs, and cloaks, and streaming ribbons, and dainty whites; when looking down into the lock from the quay, you might fancy it was a huge box into which flowers of every hue and shade had been thrown pell-mell, and lay piled up in a rainbow heap, that covered every corner.

On a fine Sunday it presents this appearance nearly all day long, while, up the stream, and down the stream, lie, waiting their turn, outside the gates, long lines of still more boats; and boats are drawing near and passing away, so that the sunny river, from the Palace up to Hampton Church, is dotted and decked with yellow, and blue, and orange, and white, and red, and pink. All the inhabitants of Hampton and Moulsey dress themselves up in boating costume, and come and mooch round the lock with their dogs, and flirt, and smoke, and watch the boats; and, altogether, what with the caps and jackets of the men, the pretty coloured dresses of the women, the excited dogs, the moving boats, the white sails, the pleasant landscape, and the sparkling water, it is one of the gayest sights I know of near this dull old London town. ﻿

It is not a nice day here, it is pouring with rain and looking like eternal winter. But spring is on its way and there might be fine Sundays in the future, and this is a lovely cheerful image to think about. The book is still very funny to modern readers, unlike many comedy classics: the Hampton Court maze story is famous, and a personal favourite is the bit where George and J realize they are being photographed, so have taken up attractive attitudes, and thus don’t realize their boat is about to tip up.  The photographer sets 'his wretched machine in motion at the precise moment that we were both lying on our backs with a wild expression of "Where am I? and what is it?" on our faces, and our four feet waving madly in the air.’ In some ways J is the original unreliable narrator, wondering why a story is varyingly funny depending on exactly whose shirt has got wet.

The book was a massive bestseller in its day, and actually contributed to the weight of river traffic – it became very fashionable to try to re-create parts of the trip, thus adding to the excitement of the river journeys.

With thanks to Deborah Machin, who brilliantly suggested both extract and picture.