[M Charles Swann has heard from his doctor that he is dying. He goes to see his friends the Duke and Duchesse de Guermantes to tell them his news, but they are rushing to go out.]

The Duke exclaimed…“Come Oriane, don’t stop there chattering like that and exchanging your jeremiads with Swann… Forgive me Charles,” he went on, turning to Swann, “but it’s ten minutes to eight already…’

Mme de Guermantes advanced resolutely towards the carriage and uttered a last farewell to Swann. “You know, we’ll talk about that another time; I don’t believe a word you’ve been saying, but we must discuss it quietly. I expect they’ve frightened you quite unnecessarily. Come to luncheon, any day you like” (with Mme de Guermantes things always resolved themselves into luncheons), “just let me know the day and the time,” and, lifting her red skirt, she set her foot on the step. She was just getting into the carriage when, seeing this foot exposed, the Duke cried out in a terrifying voice: “Oriane, what have you been thinking of, you wretch? You’ve kept on your black shoes! With a red dress! Go upstairs quick and put on red shoes, or rather” he said to the footman, “tell Mme la Duchesse’s lady’s-maid at once to bring down a pair of red shoes...” 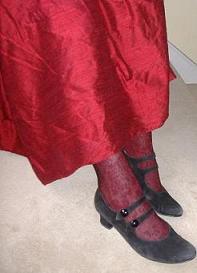 
Proust is long. It’s discursive, it’s hard to find you way round in it, it’s hard to follow the titles and names. It would help if there were a few more chapter divisions and section names. The people in it are, on the whole, rather worthless – they can’t stop to talk to (or listen to) a friend with bad news, but a shoe of the wrong colour is vitally urgent. No-one is much better than anyone else. But – for the people who love it, A la recherche de temps perdu is the work of art that overshadows all others. It is like opera: it takes something that is amazingly specific, and particular, and narrow, and turns it into something with relevance for everyone.

There are lines that resonate. Some random threads: Charles Swann says “To think that I wasted years of my life, that I wanted to die, that I felt my deepest love, for a women who did not even appeal to me, who was not my type!” (transl Lydia Davis). He hears another man say (about this same woman): “I remember I slept with her on the day MacMahon resigned.” That would make it 30 January 1879: MacMahon is a real person - who’d’ve thought there was a French general and President with that name? (He was descended from one of the ‘wild geese’ – the Earls who fled Ireland for France in the 17th century.)

And this description, from near the end of the work, a description of the aging society ladies he has known for a lifetime:

There were women too whose graves were waiting open to receive them: half-paralysed, they could not disentangle their dress from the tomb-stone in which it had got stuck, so that they were unable to stand up straight but remained bent towards the ground, with their head lowered, in a curve which seemed an apt symbol of their own position on the trajectory from life to death, with the final vertical plunge not far away.