Love affairs are even more miserable in Ireland

The Country Girls by Edna O'Brien 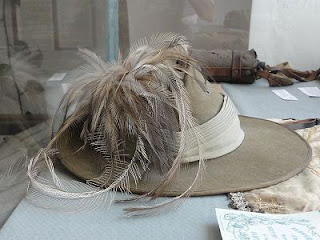 [Caithleen, a young woman living away from home in Dublin, is due to meet her older, married lover for an illicit trip to Vienna]

It ws raining. The rain upset my plans. I was to wear a white feather hat and I could not possibly let it get wet. It was a lovely hat that fitted tight to the head, and the feathers curved down over my ears and gave my face a soft, feathered look.

When I was leaving the shop at four Mr Burns gave me my wages and a pound extra for the journey home. I told them there was an aunt dying.

‘Good God, you can’t go out in that rain’ he said.

‘I’ll miss my train if I don’t.’ So he went into the hallway and found me an old umbrella. A godsend. I could wear my hat now. I almost kissed him. I think he expected me to, because he smoothed the brown hairs of his moustache…

[she goes back to her lodgings to change]

I came downstairs in my black coat and my white feather hat. I had made my face pale with pancake make-up and darkened my eyelids with green mascara. The long coils of auburn hair fell loosely round my shoulders, and though I was tall and well developed around the bust, I had the innocent look of a very young girl. No one would have suspected that I was going off with a man.

I had put my gloves in my bag, so that they wouldn’t get wet. They were white kid gloves of Mama’s. There were stains of iron mould where they buttoned at the wrist but otherwise they were lovely.

It was still raining when I came out…﻿

Oh dear oh dear. Mr Gentleman isn’t going to turn up, is he? And yes, after waiting for hours and hours in the rain, she will come back to her lodgings (where a cancelling telegram awaits her), and will take her hat off and throw it on the hallstand. “It was a wet, grey hen now.”

Edna O’Brien’s books of girls growing up in a repressed Ireland aren’t quite as depressing as they might be. Her writing style is extraordinary, and inimitable: she is like someone who hasn’t been told what to leave out, someone who has no idea what other people will know or want to know, although her books are not long. In a sense her prose is, in that favourite phrase of critics, flat and affectless, but then you finish reading with a sense of something quite other. The books are still mesmerizing and very weird, more than 50 years after they were written.

Edna O’Brien might remind you of Colette, doing something similar in France with her Claudine books more than 50 years before that, though France just does seem a lot more glamorous and exciting. Strangely, both women were married to overbearing older men who claimed credit for these stories of young girls’ longings and romantic education. In both cases it is particularly hard to believe (as no-one seriously does) that anyone but a woman could have written them. Although – green mascara on her eyelids?

The hat is from a museum in Jerusalem, and the photo can be found on Wikimedia Commons.
Claudine Colette Country Girls Edna O'Brien hat