A fascinating fact about fascinators

A Caribbean Mystery by Agatha Christie 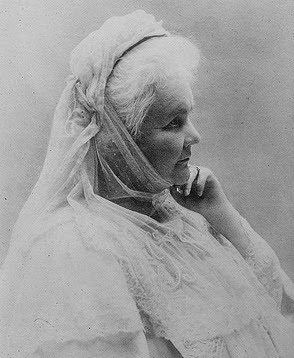 [Old-lady sleuth Miss Marple is investigating a crime while on holiday in the West Indies.] Miss Marple woke suddenly and sat up in bed. Her heart was beating. She switched on the light and looked at the little clock by her bedside. Two am. Two am and outside activity of some kind was going on. She got up, put on her dressing gown and slippers, and a woollen scarf round her head and went out to reconnoitre….

[Mr Rafiel] was fast asleep in bed...when he was taken by the shoulders and shaken violently… “It’s me,” said Miss Marple, for once ungrammatical, “though I should put it a little more strongly than that. The Greeks, I believe, had a word for it. Nemesis, if I am not wrong.”

Mr Rafiel raised himself on his pillows as far as he could. He stared at her. Miss Marple, standing there in the moonlight, her head encased in a fluffy scarf of pale pink wool, looked as unlike a figure of Nemesis as it was possible to imagine.﻿
Observations:


Miss Marple does not have on a headpiece consisting of a flower, a waving feather and a square of netting, but she IS wearing a fascinator. It is never named as such in this book, but in Nemesis, a sort of sequel seven years later, Miss M reminisces about the incident above: “She’d been wearing that pink wool – what used they to call them when she was young? – a fascinator. That nice pink wool kind of shawl-scarf that she’d put round her head.” An old definition of a fascinator is ‘a covering for the head of silk, lace, or crocheted net worn by women’ - a lightweight head covering which would give some warmth and protection without ruining a hairstyle. It’s not clear how the term became attached to an item worn by women who want something on their head but not a hat, mostly for weddings.

The books may not describe a world that anyone would recognize as real, but are still good for a few sociological observations along the way – particularly in language and attitudes. In this one, a housesitter is mentioned: “He’s very house proud. He’s a queer.” This may be the only such direct reference in the canon – although there are strong implications of gay relationships in some of the books (don’t even start on the recent TV adaptations.) There is also some speculation about the possibility of a secretary having an affair with a male valet/masseur (oh the career opportunities open to AC characters!): “He hasn’t cut any ice in that direction. For one thing, there’s class distinction. She’s just a cut above him. Not very much. If she was really a cut above him it wouldn’t matter, but the lower middle-class - they’re very particular.”

Connections: In the later book, Miss Marple (who is about 140 by now) is described by a solicitor as being of the type of a Provincial Lady. She also featured in this blog entry on The Body in the Library.

The picture is from the Library of Congress, via Flickr, and shows a Queen of Romania – apparently Queen Elisabeth. Not quite the right queen, but no excuse not to quote Dorothy Parker's Comment:

Oh, life is a glorious cycle of song,
A medley of extemporanea,
And love is a thing that can never go wrong
And I am Marie of Romania.
A Caribbean Mystery Agatha Christie Body in the Library Diary of a Provincial Lady Dorothy Parker fascinator hat Miss Marple