The Bell Jar by Sylvia Plath


I wore a black shantung sheath that cost me 40 dollars. It was part of a buying spree I had with some of my scholarship money when I heard I was one of the lucky ones going to New York. This dress was cut so queerly I couldn’t wear any sort of bra under it, but that didn’t matter much as I was skinny as a boy and barely rippled, and I liked feeling almost naked on the hot summer nights. The city had faded my tan, though. I looked yellow as a Chinaman. Ordinarily I would have been nervous about my dress and my odd colour, but being with Doreen made me forget my worries. I felt wise and cynical as all hell… 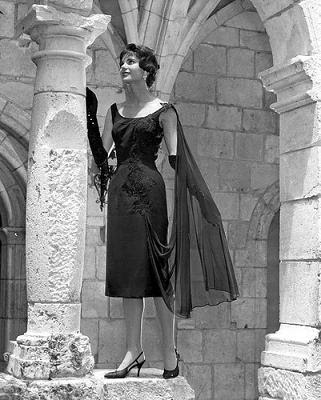 [last night in New York.]  I stood quietly in the doorway in my black sheath and my black stole with the fringe, yellower than ever, but expecting less. ‘I am an observer’ I told myself, as I watched Doreen being handed into the room by the blond boy to another man, who was also tall, but dark, with slightly longer hair. This man was wearing an immaculate white suit, a pale blue shirt and a yellow satin tie with a bright stickpin.

I couldn’t take my eyes off that stickpin.﻿

The Bell Jar again – last time we had Esther’s friend Doreen, the southern belle in her white dress. Before the second night out above, Esther complains about her clothes to Doreen, saying she can’t face them, and Doreen stuffs them all out of sight under the bed. This black dress is the one item Esther saves: ‘Hey. Leave that one out. I’m wearing it.’

This particular evening is not going to end well, the man with the stickpin is not a nice man at all, and the black dress will end up very muddy. When Esther returns from the night out, she – ‘quiet as a burglar in my cornflower-sprigged bathrobe’ - throws her clothes off the roof of the hotel where they are living. And after the clothes go off the roof, Esther’s life is going into freefall too.

‘Yellow as a Chinaman’ is of its time – normal usage then, seen as a racial slur now.

J D Salinger’s Catcher in the Rye – this blog entry – was published in 1951, two years before the time of The Bell Jar, and also featured a young person wandering round New York, trying to make sense of life, and headed for a breakdown. ‘I felt wise and cynical as all hell’, above, sounds exactly like Holden Caulfield.

The photo is from the Florida State Archives and is featured on Flickr.
Catcher in the Rye Holden Caulfield J D Salinger New York Sylvia Plath The Bell Jar