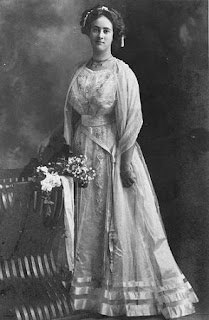 "...To be sure Miss Squeers was in a desperate flutter as the time approached, and to be sure she was dressed out to the best advantage: with her hair – it had more than a tinge of red, and she wore it in a crop – curled in five distinct rows, up to the very top of her head, and arranged dexterously over the doubtful eye; to say nothing of the blue sash which floated down her back, or the worked apron or the long gloves, or the green gauze scarf worn over one shoulder and under the other; or any of the numerous devices which were to be as so many arrows to the heart of Nicholas. She had scarcely completed these arrangements to her entire satisfaction, when the friend arrived with a whity-brown parcel – flat and three-cornered – containing sundry small adornments which were to be put on upstairs,and which the friend put on, talking incessantly. When Miss Squeers had ‘done’ the friend’s hair, the friend ‘did’ Miss Squeers’s hair, throwing in some striking improvements in the way of ringlets down the neck; and then, when they were both touched up to their entire satisfaction, they went downstairs in full state with the long gloves on, all ready for company…"


The event they are about to attend is not, as you might think, a grand ball or reception. Fanny Squeers and her friend – the miller’s daughter – are about to entertain Nicholas Nickleby and a corn merchant’s son for an afternoon teaparty. Nicholas is working as a teacher at Dotheboys Hall, and Fanny is the daughter of headmaster Wackford Squeers (who generously says that if Nicholas wants to ‘learn the boys anything besides minding them, I have no objection I am sure.’) Fanny, stuck in the wilds of Yorkshire and desperate to be married, has taken a fancy to Nicholas, and is hoping the teaparty will seal the deal. George Orwell, who wrote brilliantly about Dickens, points out that he is very hard on men who aspire to women too far ‘above’ them, and he is also not very forgiving of Fanny’s delusions of grandeur. Although even-handed about some aspects of class  - “Miss Squeers was lazy enough (and sufficiently vain and frivolous withal) to have been a fine lady; and it was only the arbitrary distinctions of rank and station which prevented her from being one” – Dickens makes it clear that she is not good enough for Nicholas, and shouldn’t have dared to presume. Her moment will come: when Nicholas leaves the school, in dramatic circumstances, she writes a vicious letter to his uncle outlining what happened. It is a wonderful piece of work, and contains my favourite line in all Dickens: “I am screaming out loud all the time I write…which takes off my attention rather and I hope will excuse mistakes.”
Charles Dickens was born 200 years ago this week.
The picture is of an Australian lady named Annie Foot, in evening dress,  in 1910. It is part of the State Library of Queensland’s collection and is featured on Flickr.