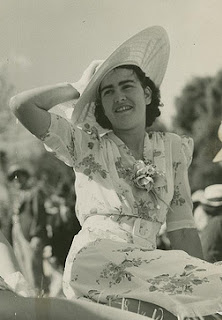 [Miss Lucy Pym, a psychologist, is visiting Leys, a ‘college of physical culture’]
“… ‘Desterrro doesn’t play games,” Henrietta had said, ‘so I’ll send her to keep you company.’ Lucy had not wanted anyone to keep her company… but the thought of a South American at an English college of physical training teased her.  And when Nash, running into her after lunch, had said: ‘I’m afraid you’re going to be deserted this afternoon, if you don’t care for cricket’, another Senior passing in the crush had said: ‘It’s all right, the Nut Tart is going to look after her.’…
Lucy looked forward to meeting a Nut Tart, and sitting in the sunlit garden… she pondered the name. ‘Nut’ was Brazil, perhaps. It was also the modern slang for ‘dippy’ or ‘daft’, she believed. But ‘tart’? Surely not!...
Round the corner of the house came a figure in a flowered silk dress and a plain, wide-brimmed shady hat. It was a slim, graceful figure, and watching it come Lucy realized that she had unconsciously pictured the South American plump and over-ripe. She also realized where the ‘tart’ came from, and smiled. The outdoor frocks of the austere young students of Leys would not be flowered: neither would they be cut so revealingly; and never oh never would their hats be broad-brimmed and shady…”


Miss Pym Disposes is rather a sinister book, because it is set in such wholesome surroundings. Everything is too perfect, the girls are healthy and clean-living. Something is sure to go wrong, and it does. Many detective story fans have a real penchant for murder stories set in educational establishments, and this is a classic of the genre. (The college is an all-female institution where women train, mostly, to be games mistresses at all-girls schools.) It would make a wonderful film or TV programme, and it's surprising that it never seems to have been adapted for any other medium.
The ending of the book (the very ending, the very last page) is shocking and discomfiting. But along the way we have had the usual turn through Josephine Tey’s wide range of views and prejudices, her firm decisions about who is nice and who isn’t. She is a most entertaining writer, even if some of her views are either rather shocking (though probably average for her time) or just passingly over-judgmental – Lucy Pym watches her friend putting sugar in her coffee: “How nice, thought Lucy wistfully, to have a figure like a sack of flour and not to mind!” Her books have a vintage feel about them, but are still a good entertaining read. ‘Daughter of Time’ - about the Princes in the Tower – is probably her best-known now: it is full of criticisms of historians' ways, although not innocent of the same lapses, but at least it stands as an attempt to make people think about Richard III. The Franchise Affair also pops up from time to time, but a personal choice would be Miss Pym, and the marvellous Brat Farrar, with its young man back from the dead who may be an impostor. In  Daughter of Time and one of her police novels – To Love and Be Wise – an author, Silas Weekley appears: he plainly writes rural gothic novels of the kind satirized in Cold Comfort Farm, featured in this blog entry. Josephine Tey herself was much involved in the theatre – she wrote a play, Richard of Bordeaux, which was one of John Gielgud’s first big hits – and the theatre features just enough on the edges of the detective stories.

The photo is of a young lady at a regatta in Brisbane. It is part of the Queensland State Collection, and is featured on Flickr.
Brat Farrar Cold Comfort Farm Daughter of Time Franchise Affair Josephine Tey Miss Pym Disposes Princes in the Tower Richard III Richard of Bordeaux To Love and Be Wise. John Gielgud