What would you do for money? Wings of the Dove 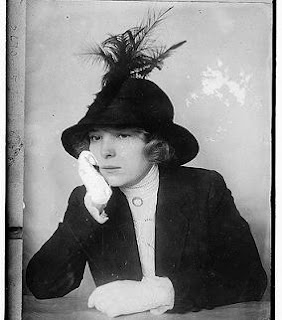 [Kate Croy is visiting her father, a man about whom her mother has said 'If you hear anything against your father--anything I mean except that he's odious and vile--remember it's perfectly false.']

“… She re-adjusted the poise of her black, closely-feathered hat; retouched, beneath it, the thick fall of her dusky hair; kept her eyes aslant, no less on her beautiful averted than on her beautiful presented oval. She was dressed altogether in black, which gave an even tone, by contrast, to her clear face and made her hair more harmoniously dark…

She had stature without height, grace without motion, presence without mass. Slender and simple, frequently soundless, she was somehow always in the line of the eye – she counted singularly for its pleasure. More ‘dressed’, often, with fewer accessories, than other women, or less dressed, should occasion require, with more, she probably could not have given the key to these felicities..."

How brilliant are Henry James’s names? Kate Croy and Milly Theale – one’s the scheming poor girl and one’s the high-minded heiress, and isn’t it obvious which name is which? But even that description is too simplistic. This is a book with an incredible moral drive,  and yet the story is told in a bizarrely allusive way, so that quite often you’re not sure what people are talking about, or who knows what at any given time. It is one of his later books, and James is said to have dictated them, and that seems to make sense. Some of his sentences are extraordinary - try this one from book 6: “He had no more money just as he was than he had had just as he had been, or than he should have, probably, when it came to that, just as he always would be; whereas she, on her side, in comparison with her state of some months before, had measureably more to relinquish.” It sounds like one of those made-up language expert sentences to include as many ‘had’s as possible.
But – the book is a supreme work of art, with a compelling and memorable plotline. Millie is not expected to live long, and Kate and her secret fiancée, Merton Densher, plot to gain her fortune. But of course it is not that simple.
Similar plotlines – getting your love to marry someone who is going to die – turn up in Agatha Christie novels (can’t spoiler by saying which) and in the 1978 Terrence Malick film Days of Heaven (the other half of the plot comes from the Book of Genesis, surprisingly). There is a reverse version in Mrs Gaskell’s Wives and Daughters (this blog entry) – a penniless potential suitor has been firmly discouraged by a scheming mother, but then she finds out confidential medical info about his elder brother the heir, and suddenly he looks more attractive….
The book (1902) contains a surprising reference to ‘the social scene’ – a scriptwriter putting that into Downton Abbey (set 10-20 years later) would probably be criticized for using an anachronism.
The mother's defence of the father is one of a number of  unexpectedly funny lines in the book: James has more humour in him than people expect.

The photo is from the Library of Congress collection, and is featured on Flickr.
Agatha Christie Days of Heaven Genesis Henry James Merton Densher Milly Theale Mrs Gaskell Terrence Malick The Wings of the Dove Wives and Daughters