“…John hesitated, his eye caught by a small figure which suddenly crept from a cellar entrance below one of the opposite houses, and then jumped into a narrow boat below. It was a child, a little girl – she couldn’t have been more than five or six – wearing a short coat over her minute skirt, a pixie hood covering her head. There were four boats moored, line upon line, and she proceeded to jump one to the other with surprising agility, intent, it would seem, upon escape. Once her foot slipped and he caught his breath, for she was within a few feet of the water, losing balance; then she recovered, and hopped on to the furthest boat… [the child] vanished into the house, the boat swinging back into mid-canal behind her. The whole episode could not have taken more than four minutes. Then he heard the quick patter of feet. Laura had returned. She had seen none of it, for which he felt unspeakably thankful. The sight of a child, a little girl, in what must have been near danger, her fear that the scene he had just witnessed was in some way a sequel to the alarming cry, might have had a disastrous effect on her overwrought nerves…
[A day later] He had almost reached the end of the alley, and the bridge was in sight, when he saw the child. It was the same little girl with the pixie-hood who had leapt between the tethered boats the previous night and vanished up the cellar steps of one of the houses. This time she was running from the direction of the church the other side, making for the bridge. She was running as if her life depended on it, and in a moment he saw why…” 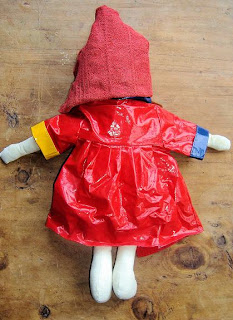 John and Laura are visiting Venice to try to recover from the accidental death of their young daughter, Christine: this is why the glimpses of the small child are so disturbing. Not as disturbing as other things that are going to happen…
People my age know this story from the 1973 Nicholas Roeg film of the same name, which starred Julie Christie and Donald Sutherland. It was unanimously revered by us for two reasons – the child in the red coat, and a startling and wonderful sex scene. Actually it is surprising that any of us grew to middle-age unscathed by this experience: one film, two hours long (well, less when censored by the BBC, as happened during the 1970s) which combines one of the most gorgeous (and in those days very unusually graphic) sex scenes with one of the most shocking endings. We surely were traumatized - most of us certainly never saw red coats in the same light ever again.
So it was a surprise to go back to the original story, and find that the colour of the child’s coat is not specified – a red coat does feature, but in another context. The story is still chilling and shocking, and highly atmospheric. It’s never a light-hearted comedy in Venice, is it?