Christmas Books: Done your cards yet?

Christmas Book Scenes are back!  During December I like to post entries which are more Christmas in Books than Clothes in Books, and kind readers say it puts them in a seasonal mood.

Anybody Can Do Anything by Betty MacDonald 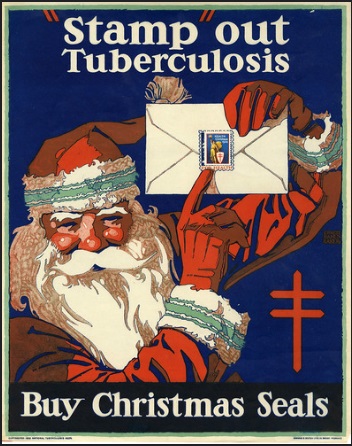 I had been working for the Treasury Department a little less than a year…. One night my friend Katherine and I stayed on after work and ran off my Christmas card on the office mimeograph….

The next morning when I arrived at the office, I was greeted by furtive looks and whispered conferences.

‘What in the world’s going on?’ I asked, thinking they had at last uncovered some enormous bribe or misappropriation of funds.

‘Someone broke into the building and used the mimeograph last night’, a frightened co-worker whispered. ‘They’re holding a conference about it downstairs now.’

He was so solemn about it all that I thought for a moment he was going to hand me a pistol and tell me that he would leave the room while I took the only way out. He didn’t though. He looked out the window. Stared straight ahead. Leaned back in his chair and jingled coins in his pocket and finally said to me, ‘Well, I’m going to forget the whole thing. I’m just going to pretend it never happened.’ 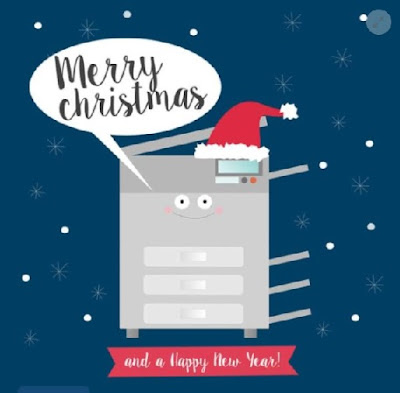 comments: If there’s one thing I enjoy, it is an item in a book that seems like an anachronism but isn’t: the kind of thing that a fiction writer doing a novel set in the past would be slammed for.

The above incident takes place in 1936 (calculated from B McD’s biography) and seems terribly unlikely – but there it is. I don’t suppose many people were using their office machines, the equivalent of the photocopier, to create Christmas cards back then.

A mimeograph machine created duplicate documents from a stencil, now obviously superseded by the photocopier, but still very much in use 30-40 years ago. All schools had them… A popular brand had the tradename ‘Roneo’, and much innocent laughter could be produced by saying ‘oh go and do it on your Roneo’, such a jolly phrase.

The anecdote above ends: ‘I took great pleasure in sending one of the Christmas cards to every single person in the Treasury Department, many of whom I didn’t know. I could just see them burning them in ash trays and burying the tell-tale ashes in old flower pots.’ 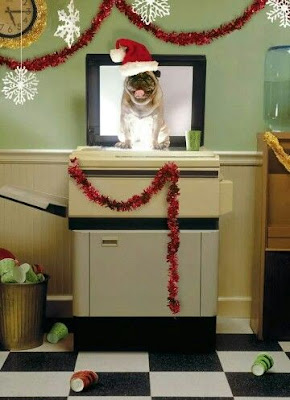 Betty MacDonald was a phenomenon of the 1940s and 50s: she wrote a wildly best-selling book called The Egg and I. It was what you might call a tidied-up memoir, designed to amuse and entertain, about her life on a rural chicken farm. The book topped the bestseller charts for nearly a year, selling more than a million copies in that year. It inspired a series of successful films. She followed it up with a couple more similar memoirs, including this one, and some children’s books, including the much-loved Nancy and Plum. She had not much more than 10 years to enjoy her phenomenal success, dying in 1958.

I have featured her several times on the blog already – her TB memoir, The Plague and I, as well as this book. I offered a gentle criticism that she didn’t undergo much editing because of her bestseller status. This one is a scrappy collection of memories, some interesting - but the books are all very funny and entertaining, and give a fascinating picture of life in her time and place. That happens to be Seattle and vicinity in about a 50-mile radius, in Washington State in the NW of the US, a place where I have lived in myself, so there is always extra interest, as I know whereof she speaks. But anyone could get enjoyment from her books, and she has phrases that stick in the mind. Author & blogfriend Hilary McKay says her family repeats  ‘Please keep Imogene until she is 30’ (in reference to difficult adolescents). Whenever I struggle with dreary carpet hoovering and cleaning I think of her claim that (words to the effect) ‘white velvet would have been slightly, but only slightly, less practical as a floor covering’ and it cheers me up. Lissa Evans, another author and blogfriend, is also a fan.

This previous post on this book says more about it: Dress Down Sunday: 2 by Betty MacDonald (clothesinbooks.blogspot.com)

To add another Christmas-y aspect – after writing The Plague and I, Betty MacDonald was involved with publicity and fund-raising for combatting TB. The National Tuberculosis Association used to sell Christmas seals, and she came on board to launch the campaign. It was obviously a long-running project: this example above is from 1924.

The design above for a photocopier-themed Christmas card is from Photocopier Two Christmas Cards | OILTD007 | Free Personalisation Online (pipedreamchristmascards.co.uk)

The third picture called, boldly, Pug office holiday party photocopier. [Google keeps sending me pictures of pugs since I found this picture, and I really am not interested. Why no pictures of photocopiers?]  It was uploaded to Pinterest by Miss Meghan (2003) Pinterest