Christmas Book Scenes!  Christmas in Books rather than Clothes in Books, though this week’s Panto entries do have clothes in the form of animal costumes…

The Mystery of the Pantomime Cat by Enid Blyton 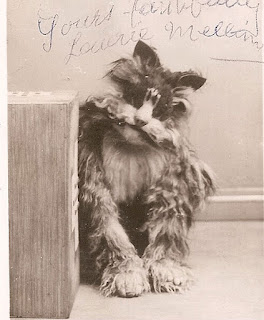 The children shouted with delight as he shuffled in on all fours, dressed in the big furry skin… He was very funny, he waved to the children…he capered about, cuddled up to Zoe Markham (who was Dick Whittington and looked very fine indeed), and was altogether quite a success.

Yesterday’s entry was a seasonal mystery set at the pantomime, featuring Dick Whittington and his cat. Strangely enough, as we said, Enid Blyton’s Five Find-Outers investigated The Mystery of the Pantomime Cat in 1949, intriguingly – it’s quite a niche topic, and here are two books within two years of each other.

Blyton’s Find-Outers mysteries were a gateway drug for many a young reader who was going to end up addicted to Golden Age mysteries. My friend JJ, over at the Invisible Event blog, is another fan (though I’m not sure he read them as a child). You can see his take on this book here. 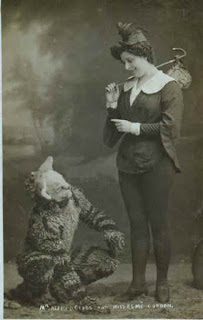 I read the whole lot in Armada paperbacks at 2/6 (that’s two-and-six, half a crown, two shillings and six pence, 12.5pence in new money) * a throw, and loved them all. I featured The Mystery of the Spiteful Letters back in my Poison Pen week a few years ago, and made an unlikely connection with Dorothy L Sayers’ Gaudy Night, so we are developing a theme of linking her with other writers…

It cannot be denied that Blyton was no great stylist, but she could keep young people’s attention and she could make a story rollick along.

Some people really disapprove of her writing - it doesn’t challenge or educate children, it is trivial and banal. My own view is that anything that gets children reading is good. Of course she has occasional ‘attitudes of her time’ which maybe could be edited now. That would be more sensible than changing prices and coins to reflect modern times which seems unnecessary – in my edition of this one, these 1947 children take ‘several pound coins’ to buy a child’s present – that’s more than the lady in yesterday’s entry lived on for a week, quite apart from the fact that pound coins didn’t exist then… And they would have been able to buy at least 16 copies of my 1960s paperback for that money.

For some reason, the Dick Whittington panto (very small-scale and described as a ‘skit’) is being performed in the Easter holidays, so not much seasonal detail here. 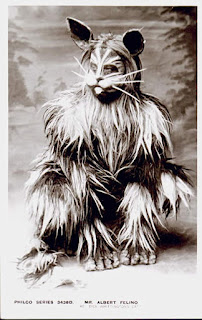 The actor playing the Pantomime Cat is obviously meant to be special needs, and this is done surprisingly sensitively for the era, I thought.

Bets turned and looked at him. She did not see the ugly face, the too-close eyes, the big-toothed mouth. She only saw the half-scared kindness that lay behind them all. She gave him a sudden hug, thinking of him as if here were a child much younger and smaller than herself.

everyone (adults, children, clever policemen, stupid policemen) takes FOREVER to work out that the person in the cat costume may not be who you think it is, that it is intrinsic disguise…

Many of the children’s activities are completely unconvincing – their leader can disguise himself as anything and fool everyone – but the freedom with which they run around town with no supervision is almost more unlikely. But maybe it is  authentic? And although Blyton can be very goody-goody, and get into those elements of honour, shame, no snitching and so on, which are annoying feature of books of the era (and prevalent also in books by a lot better writers), she has a sometimes surprising robustness which saves her: she is on the children’s side. They are cheeky, they hinder the law, they plant false evidence, they Waste Police Time, they accidentally cast suspicion on an innocent character with their activities – but all with their suburban ways and no doubt posh private school accents. Their dog causes mayhem, and would drive me mad in real life, but Blyton lets him get away with murder. It is an area where I am actually on the side of PC Goon.

I very much recommend JJ’s review from last year, as mentioned above. I see that we noticed some of the same things, but he has a much more detailed consideration of the plot than I – absolutely typical that he is giving proper judgement on detection and clues and I (note name of blog) am more interested in cat costumes.

Pictures, again, from the It’s Behind You pantomime website. Except for the Swedish book cover - not sure where I got that from.

* Laurie R King is a writer I love and revere and enjoy, but she is not the only US writer who carefully researches the facts of life in England 100 years ago, but gets it wrong about the money: there were 12 pennies in a shilling, and it is just not the same-money-but-everything-cheaper than it is now.