The Gladys Mitchell eye on pageants

Pageant of Murder by Gladys Mitchell 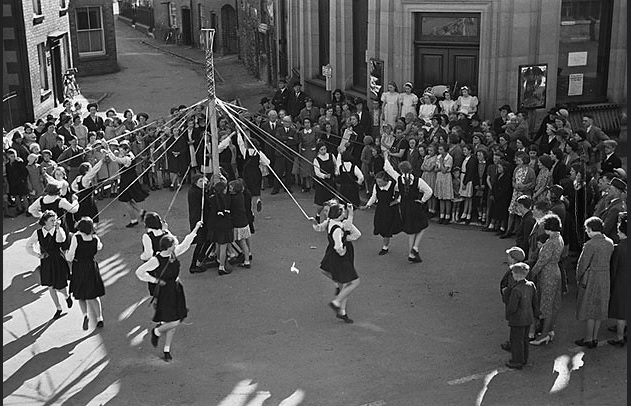 There were moments of tension, it was true, as when some of the maypole dancers went wrong in reverse, but their teachers, wading waist-deep, soon pushed and prodded the thing to rights, and … they trotted off, amid applause, to be regaled with lemonade and buns in a large marquee which had been set up in the paddock.

When I wrote my recent post on pageants in literature, Chris Wallace came into the comments to say:

Gladys Mitchell has Pageant of Murder where two actors in a pageant are murdered. Somewhat confusing as usual, but I have enjoyed all of her books for the sheer fun of it.

I immediately ordered a very expensive copy of this out-of-print title, and money well spent – I enjoyed it very much. It is late Mitchell and on the indispensable Stone House site – first port of call for everything to do with the Great Gladys – you can read an excellent synopsis and review off the book, including this:

Pageant of Murder displays Gladys Mitchell’s later-career weaknesses: she keeps her principal players offstage — the three victims are more often identified by their historical personas, and the suspects are more often spoken about than spotted — and her dialogue tends to dialectic.

All true of course, but the upside is that the book isn’t quite as mad as some of the others, it more resembles a normal crime story, which most Mitchell books don't. There are murders, there is a proper plot, events follow on from each other in a reasonable manner. It is also very funny – Mitchell gently mocks the goings-on of life in the outer suburbs of London. The book is set in Brayne (I am assuming that this stands in for Brentford, well known to GM, and the setting of The Rising of the Moon) – a district west of London which is about to be raised from a town to a borough, and decides to celebrate with a pageant. The Council meetings to discuss this are particularly amusing.

This line from the list of events gave me endless joy:

‘… to be followed by a display of dressage by Joan of Arc, Charles II and Dick Turpin.’

After a day of parading by such historical characters (and Henry VIII and his six wives) there will be an evening event in the Town Hall, which is where things will start go wrong. The drama club (‘there was such enormous scope for peacemaking in the drama club’) are doing Scenes from The Merry Wives of Windsor , which will be disrupted when Falstaff disappears. 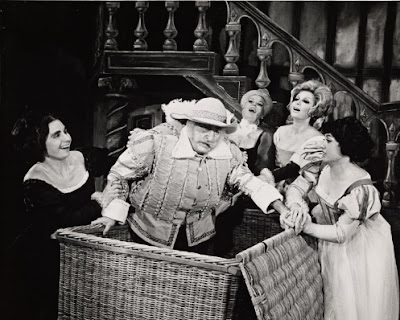 Other joys include the Tossington Tots (‘repulsive little so-and-so’s!’) who may remind us of Wintle’s Wonders in a favourite Noel Streatfeild book – this picture spoke to me of child dance troupes, though it actually shows (of all things) a Shirley Temple lookalike contest from the State Library of New South Wales. 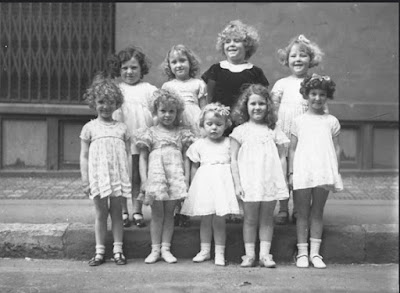 There is a formation dance team, a ballet display and a choir. Tremendous. We find the Town Hall has a special room called ‘bouquets’ because floral tributes are an important part of any such show (including the performers who bring their own in case no-one else has bothered – see Matthew Sweet’s magnificent Shepperton Babylon for more on this).

In an event-that-could-never-happen-except-in-a-book, it’s decided to hold a second pageant, for no reason except to give more opportunity for plot developments. But, y’know, bring it on.

Philip Larkin, Mitchell’s most famous fan, was very appreciative of scenes where Laura, Mrs Bradley’s assistant, goes swimming in search of clues, and it happens here. Laura and other characters are frequently happy to go swimming naked, but not in this case:

She took off her skirt. Under it… she had taken the precaution of wearing a tennis dress whose top had acted also as a shirt.

I can just about imagine it.

Surprisingly, Laura mentions Dr Who. The iconic TV character first appeared in November 1963, so was a very recent arrival when this book was written – Mitchell can hardly have guessed how very long-lived the Doctor would be.

All in all, a great title for my list of Gladys books, and for my collection of pageant scenes.

The maypole scene is from the The National Library of Wales and shows the Llanfyllin carnival and maypole in 1941 (more than 20 years earlier than the book, but seeming exactly right to me). There are, by the way, an astonishing number of pictures of maypole dancing on the internet, given it's quite a niche activitiy. See also this post for tendentious views on where the maypole tradition came from.

All pictures of people playing Falstaff look the same: this one, from NYPL, is from the right era – 1967 – but is imperfectly filed so nothing but the date and (unmistakeably the character) is clear, and it might even be from Verdi’s opera. The laundry basket is obviously a key prop for those wishing to commit heinous crimes to his person.