Postscript to Poison by Dorothy Bowers I am looking at Dorothy Bowers for the Bodies From the Library Conference coming this June, and this was her first published book. She got some very nice reviews:

“Miss Bowers is new this term. Let me be the first member of the staff to extend her a hearty welcome. She has been coached in our traditions, and is likely to settle down quickly. “Postscript to Poison” is a thoroughly satisfying piece of family narcotising ― in the old horror’s medicine just before she was going to change her will. Good characters including frustrated wards, one of whom lets a film actor in by the garden gate, and the local doctor, who suffers from attacks by a poison pen. A double bluff by Miss Bowers effectively conceals who did it. This pupil has little to learn, and should go far.”

"The author shows herself considerably adept not only in contriving a plot to puzzle readers, but in characterization and command of situation. She recounts a domestic poisoner mystery in which the two step-grandchildren of the murdered woman, the local doctor, and an anonymous letter writer play important parts. Miss Dorothy Bowers, if her succeeding books maintain the level of her first, should make a name in detective fiction.”

It’s a straightforward tale, very much a traditional story – Bowers became more quirky in her later books. This one has a complicated (and rather miserable) family, a will casting a long shadow, and a bullied companion and bolshy staff. There is a very late explanation of the problems in this household in terms of its strange family tree and inherited wealth.

Old Mrs Lackland is a domestic tyrant: she has taken to her bed but refuses to die, and makes everyone’s life a misery. Her two step-grandaughters, Carol and Jenny, live in the house and are slaves to her every whim. At least the maids get a day off. Nobody knows quite how the money is going to be disposed of, and so no-one is taking any chances. I think we can all agree that this is good classic golden age setup of the kind we like to see.

In fact there aren’t a huge number of characters, so the pool of potential suspects is small when someone is murdered… 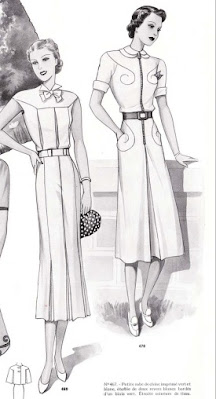 Bowers is very good at combining clothes descriptions and character in a minimum of words:

The sleeveless frock she wore, of extreme simplicity and vaguely suggestive of longer wear than its owner might care to remember, made all the brighter her challenging personality.

The girl called Jenny, dark, slim, deeply tanned, in a white-collared blue frock that set off her skin, got slowly to her feet and met the doctor’s glance hopefully.

She was wearing a thin black frock that looked faintly shabby, with shoes and stockings to  match. Her pale face was unpowdered, her lips not rouged. Yesterday’s very close little bangs of curls seemed less trim, and in the sombre dress she looked very small and childish.

Carol was very soignee in a black frock the cut of which seemed to mock its own gravity.

The old lady has a go at her feeble companion over her knitting:

‘Bullen, put that horrible garment away. It makes me hot all over to see you. A wintry touch may be welcome, perhaps, but yards of wool don’t make me feel it, and you’ll never manage to look kittenish playing with the stuff!’

She is being demonstrated as horrible, but still you can safely say this is the anti-Miss Silver… (Patricia Wentworth’s heroine had appeared in two books when this one was published)

And that set me on aspects of Postcript to Poison reminding me of a number of other books and authors.

There is a scene in the middle of the night where everyone appears in their dressing-gowns – a great favourite Clothes in Books trope – but then there is the cook: ‘Habit, which had acquired an almost religious force, had forbidden her to appear anyhow but completely dressed… Jenny’s eyes were caught and fascinated by the ponderous imitation mother-of-pearl brooch that seemed almost to support Mrs Beadle’s chin and left her marvelling that in the midst of chaos a woman could pay such meticulous attention to her own standards of propriety.’

Keen readers of Agatha Christie’s Dumb Witness – the year before, 1937 - will remember the discussions of the Clue of the Brooch, revolving round whether you wear a brooch at night…

The old lady in the case was  a great beauty and star in her day, known then as Cornelia Crown,  – reminiscent of Cremorna Garden in Dorothy L Sayers’ Strong Poison, though less of a cipher. -

The policeman says: ‘the poison being in the bottle and not in the glass is the worst puzzle of the lot, and I believe if we could solve that the other pieces would fall into place’ –  exactly the same problem, only reversed, in Agatha Christie’s Five Little Pigs.

The poor companion gets this: ‘A crafty, hysterical, harmful, but ultimately stupid type. She had all the traits of the disappointed spinster that has to face a future of starved affections and economic insecurity.’ The topic of Golden Age writers and their attitudes to older single women is surely worth a PhD for someone – starting with how old you have to be to be described as an aged spinster.  They crop up in Dorothy L Sayers (generally pro), Christie (Marple leads the way), Anthony Gilbert writes about them a lot with forensic dissection of their lives. Exhibit A, though, is  Ngaio Marsh, who never runs out of ways of being vile about unmarried women who are consigned to the scrap heap before they are 50. All featured on the blog – see tags below – and the blog is guilty of inventing the genre of Spinster Miserylit in a recent post.

There is a splendid film actor in the book, whose conversation is always entertaining. He explains that his marriage can be discounted because he and his wife are never in the same place:

‘She is never in England. Hollywood, New York, Paris, yes. Here, never.’ He denied her presence with fervent self-congratulation.

‘there is something which perhaps you like to know’ he said, with a hint of graciousness that made Pardoe feel he was a small and not very intelligent boy whose persistent curiosity was being indulged.

The book is good entertainment, although there is a moment two-thirds of the way through where Bowers seems to lose her head completely and simply tell you who must have committed a murder: I thought this couldn’t be what it seemed, but it did point only to the guilty party. It is very strange – can’t really say more for spoilers.

Other pictures are fashion illustrations of the time.

And don't forget about the  Bodies From the Library Conference - see you there!