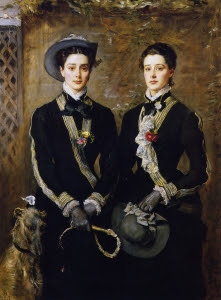 I spend much time when writing about books in pedantically criticizing minor plot fails and unlikely events - but give me a good stonking impersonation, and my picky radar fails completely and I am ready to enjoy, no matter how completely incredible the plot is. Although even at my most gullible I think ‘but surely there’s a hundred questions the impersonator could not answer?’

Indeed I occasionally think, in everyday life, ‘oh now that’s something you could use to check on an alleged impersonator, no-one else would know that’. Does everyone do that? Oh, just me then. But I’ll be READY when that fake cousin, re-appearing partner or forgotten child comes along…

The top of the league table in my view is Brat Farrar by Josephine Tey, a perennial favourite and subject of two blogposts. I re-read it in order to write this, and was reminded that a) I don’t really know what is going to happen to the characters at the end b) I have never worked out the geography* and timing of the actual crime and c) it is one of the most horribly snobbish books ever written. And it is STILL a fantastic and compelling book, and a perfect crime novel. There is also (d) the big question – when is Brat Farrar set? Jo Walton has a brilliant blogpost here on the topic – she says thinking about it inspired her own marvellous Farthing books. (Same issue applies to another great favourite by Tey, Miss Pym Disposes, in fact.)

* it seems that Josephine Tey has the geography of Clare and the whole area so very clear in her own head that she thinks we must too. I have often wondered if it is based on a real place, and if so, where. One of the mysteries of Tey is that she was so very Scottish, and this book is so very English. 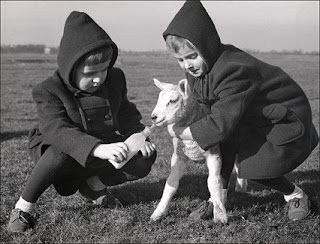 I’m listing a few more favourites here, and hope readers will add their own choices. I will be trying not to spoiler… The words ‘preposterous’, ‘ludicrous’ and ‘impossible’ turn up in the blogposts on these books, and could all be used for most of the following. But still - I cannot put it better than my friend Barb over at the Leaves and Pages blog, who says

‘Suspend your disbelief, embrace your acceptance of lucky coincidence, and come along, step inside…’ Ex-aaactly

She was talking specifically about Daphne du Maurier’s The Scapegoat, which I describe in my blogpost as having ‘an excellent melodramatic plot – two men who are unrelated but identical exchange places, and we follow the solid Englishman trying to fill the shoes of Monsieur le Comte in a small town in France.’

In the contemporary The Likeness by Tana French – and very much one of my all-time favourites – a police operative resembles a murder victim so strikingly that she can pretend to be her, and not murdered, in order to try to solve the crime. This takes some kind of prize for unbelievable setup (with a million unanswered questions, but I think we are going to have to take that as a given for all these books) but still is one of the most memorable and haunting books I have read in the past 10 years.

Mary Stewart’s The Ivy Tree is a kind of gender-switch of Brat Farrar – it was a recent re-reading of it that set me off on writing this overview, and here is an actual post on it.... 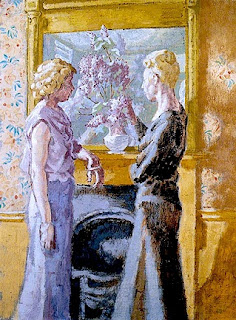 'We thought you were dead' 'Who inherits the farm?'

These four books have something in common: they are a very specific sort of Impersonation Plot where we are seeing the POV of the impersonator – we know what is going on (well of course not entirely, but…) In my view they are the very best, and rather rare, books about impersonation.

The other kind of book – and very enjoyable in its way – has the protagonists wondering if the impersonator is real or not, or else not having a clue about it till near the end. Some of the books listed below might really belong - or have elements that might belong - in the first category, but they have ended up below. I think that's because those first four are so exceptional I wanted to group them together...

The oeuvre of the revered Agatha Christie is chock-full of impersonations, as mentioned in this Christie tropes blogpost. Dead Man’s Folly, Murder in Mesopotamia (not exactly classic impersonation, but definitely in this category – and probably the single hardest-to-believe revelation in this field, and that’s saying something – could a person really….?) There’s A Murder is Announced in which all kinds of people are not who they seem, Taken at the Flood, Cat Among the Pigeons (‘always look at the knees’). And these are just the straight out long-term impersonations – there are endless short-term moments – one corpse pretending to be another, one suspect pretending to be another, a murderer pretending to be a victim…And I would estimate that impersonation crops up in an unnaturally high percentage of her short stories – where the fake personality doesn’t have to survive too long.

Patricia Wentworth also features some impersonation, though not nearly as much as Agatha Christie. The Traveller Returns is a good example.

In my researches amongst tosh of the past (see this post) I read two books by E Phillips Oppenheim and both featured impersonation plots – is that all he wrote about? They are the splendid and sexy The Great Impersonation, and then Anna the Adventuress.

More tosh: Berta Ruck’s In Another Girl’s Shoes, in which two women change places, and we follow the one who is going to meet her dead husband’s family for the first time. So obviously no-one can know she’s not the real thing – can they? (I admit to a faint feeling that I would rather have followed the other partner in the exchange, who might have been more fun)

Here’s obscure, though no doubt a bestseller back in the day: Irving Wallace’s The Second Lady  (1980) features the kidnapping of the First Lady of the USA, and her replacement by a well-trained Soviet spy. The sex life of the President and his wife features a surprising amount in this. My verdict was that the book’s ‘a weird mixture of sex talk and the Famous Five’. I think this is definitely a case where I read it so you don’t have to, though I did use the words ‘delightfully rubbish-y’ when mentioning it in a James Bond post.

More political impersonation: The Prisoner of Zenda by Anthony Hope was the original Ruritanian romance – the King is in no state to be crowned, so his doppelganger (an old-school Englishman) must stand in.

The true-life story of the Tichborne Claimant was a sad and compelling saga of Victorian times – the real-life village of Tichborne is quite close to where I live. (And for a VERY small place has quite the history - as well as the Claimant, there is also the Tichborne Dole, well worth a look, and just given out in the past two weeks). The story has inspired a number of books, including Julian Symons The Belting Inheritance (blogpost coming soon). Caroline Crampton’s Shedunnit podcast did a splendid episode devoted to Tichborne and mentioning books with identity at their centre…. All kinds of impersonation.

Then there’s John Dickson Carr - The Crooked Hinge is a notable example here, as the plot revolves round two men who were aboard the Titanic, survived, and are now both claiming the same identity. One trope this has in common with Brat Farrar, btw, is the idea that someone who taught a boy will be very well-placed to recognize him, or not, many years later - perhaps better than his own family. I'm not convinced I must say.

There will be many other examples – but I don’t have to think of them because of the phalanx of JDC experts around here who will supply other examples. My own dereliction comes because of a theory that in JDC the impersonation would always be secondary to the impossible crime, not the main feature – argue me out of that and tell me your best examples from his work. 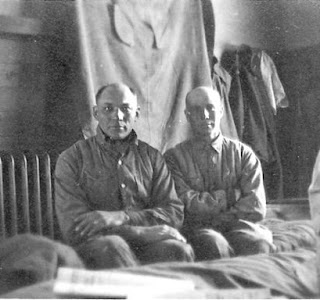 So I am hoping for some input in this list of impersonations. I think there are a lot more out there – please add your own.

I gathered up some pictures of twins to illustrate this:

The boys feeding the lamb are from the Dutch National Archive.

The other painting shows the Islington Twins by Therese Lessore from the Athenaeum again.

The twins sitting on the bed are Conscientious Objectors in the USA at the end of WW1, from the Mennonite Archives.